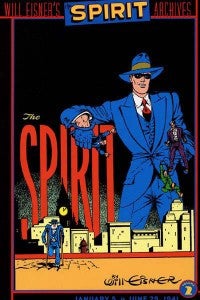 In spite of remarks made yesterday on DC Co-Publisher Dan DiDio's Facebook page, a representative for the Will Eisner Estate said that speculation the publisher no longer own the reprint rights to The Spirit Archives is groundless. Speaking with The Beat, Eisner rep Denis Kitchen said that DC retains the rights to the Archives for "the foreseeable future. There is a contractual formula I can't divulge under which the rights would revert. When that might apply is impossible to predict at the moment." Kitchen noted that, as DiDio had said the day before on Facebook, the publisher no longer had the rights to produce and publish new Spirit stories. According to DiDio, they also allowed the rights to characters like Doc Savage and  The Avenger, among others; a number of such characters had been part of DC's recent "First Wave" line of pulp heroes stories, which also featured guest appearances by DC heroes like Batman and the Blackhawks. "Sorry to say but none of these characters are still at DC but here's hoping that another publisher gets them back in print soon," DiDio told a fan who asked about new stories with the characters. And it sounds like he may get his wish: Kitchen also hinted that a press release might be coming along soon to tell fans where the next batch of new Spirit stories would be coming from. Abandoning such side projects seems in keeping with DC's post-New 52 editorial philosophy, which seems to have abandoned almost all ancillary periodicals that don't tie into the larger DC superhero universe. Fans are likely eager to see more new material featuring the character; while the film adaptation from director Frank Miller was an outright dog, the DC series published around that time, featuring work by Darwyn Cooke and others, was a fan- and critical favorite.

DC Comics Retains the Rights to The Spirit Archives, But Loses Pulp Heroes