I know it's delayed, but these books are still on the rack and worth picking up. A post-"Infinite Crisis" Krytpo tale, a "Flashpoint" mini featuring one of the more compelling speedsters, and a post-"Brightest Day" Green Arrow round up this review feature.

In Kid Flash Lost #1, written by Sterling Gates with pencils by Oliver Nome and a cover by Francis Manapul, Bart Allen awakens in a Matrix-like world, a captive of Brainiac. Kid Flash has lost his connection to the Speed Force, and is saved by a female Hot Pursuit. Bart's existence is in danger, and he seems to be a key to helping restore the world to the way it was.

This is a good first issue in what looks to be one of the standout mini's from this event. Bart has always been an entertaining character and it's no different here. Gates delivers action and explanation that is well paced and leaves anticipation for the next chapter. The art is great and even throughout the issue. This is one of the few "Flashpoint" tie-ins that has left me looking forward to more. 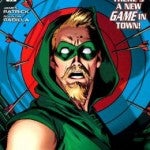 Green Arrow #13 sees James Patrick getting into Oliver Queen's head as he deals with the Reverend Billy Miggs. Ollie's dealing with his inner demons, and there are only a couple of more issues left to find peace before his title is once again relaunched with a new number 1. Green Arrow gets in over his head on what should be a routine prisoner escort and the aftermath leaves his abilities in question. Agustin Padilla's art is as dark and brooding as Ollie's inner-monologues. The book is good, and the story is off to a decent start. Hopefully things tie up nicely before the end of the series.

Then there was the case of Superman #712. What was supposed to be a continuance of the "Grounded" story was actually sent out as a Kurt Busiek, Krypto story set after the death of Conner Kent in "Infinite Crisis." While not what readers were expecting, the issue is actually well done. It's an emotional ride that definitely would have been more effective years ago when it was relevant. This one will probably go down as somewhat of an oddity, but was worth reading.