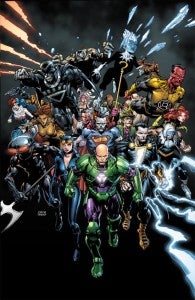 DC Comics is coming off an incredible successful September, after their Villains Month event with 3-D motion covers proved to be a hit. Yesterday, DC Entertainment announced that they sold over 4.3 million comic books in September, according to Diamond Comic Distributors. DC also pointed out that their digital comics performed strongly without releasing any specific sales numbers. So how fast are digital comics growing in comparison to print comics? DC Comics co-publisher Jim Lee gave an little insight into growth rates in a new interview with the LA Times. Lee said, "When we launched the New 52, we were the first major publisher to go with the same-day release of physical comics and digital across our entire line. That was a real game changer for us, and I think we're the only print business that I know of that has seen double-digit growth in the print channel and triple-digit growth in the digital channel." While digital sales are usually said to still be much smaller than print sales, how much longer will that be the case given the triple-digit growth rate in digital? And yes, even though these numbers are being quoted for DC Comics, it's probably likely that other comic book publishers are also seeing similar growth rates in digital. The day is coming when digital comic book sales will overtake print comic book sales. The good news is that it looks like print comics will continue to grow as that happens. While other mediums such as magazines and newspapers are seeing customers abandon print for digital, comic books might be the rare medium where digital helps print grow. Why is that? Well, one theory could be that digital is greatly expanding the reach of comic books, which results in some digital readers seeking out local comic book stores. Part of the decline in comic book sales over the last couple of decades was likely due to their disappearance from racks in grocery stores and convenience stores. With digital it helps publishers reach those customers who in the past might have casually picked up a comic book in a grocery store. Of course, the rising popularity of superhero movies is likely helping as well, but the chain of progression might be moviegoers buy digital comics, get hooked, then wind up visiting their local comic book stores.