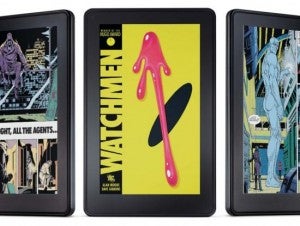 Digital comics keep making news. Awhile back, DC Comics revealed that they would be releasing 100 digital graphic novels exclusive to the Kindle Fire, and now, DC Entertainment followed it up by announcing the launch of a branded storefront on Amazon.com.

The Amazon DC Comics storefront features both DC Comics print books and the previously announced digital copies of more than 100 best-selling graphic novels. Some of the graphic novels include Watchmen, Batman: Year One, Superman: Earth One, and Sandman.

The digital graphic novels are already available for download on the new Kindle Fire, and DC revealed that they will soon be available through the broader Amazon digital ecosystem.

To insure that readers would have a good experience, DC worked with Amazon as they created their Comic Reader technology. The Comic Reader leads reader through each comic page on the Kindle Fire’s 7” vibrant color touch screen.

DC Entertainment co-publisher Jim Lee said, “The innovative ‘Comic Reader’ was developed specifically for Kindle Fire readers - the books look gorgeous on the device. We look forward to even more digital graphic-novel distribution deals, but are delighted with this first collaboration and developing it further.”