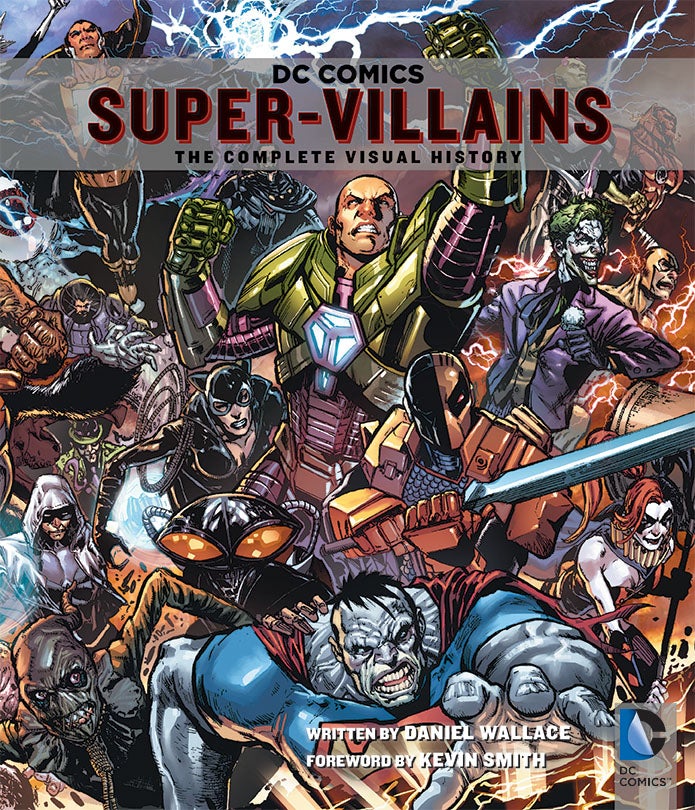 Insight Editions has provided ComicBook.com with a set of excerpts from their new book DC Comics Super-Villains: The Complete Visual History. The book is written by Daniel Wallace, who compiles a who's who history of DC Comics' most notorious bad guys. It also features a foreword by Kevin Smith.

Having read through the book, I can say that it's a fantastic visual companion to DC Comics' ne'er-do-wells. The handsome coffee table book is written from a real world perspective, letting you in on each villain's publication history, with quotes and insights from creators who have left their mark on that character. It serves as a fun, relaxing read, or a conversation starter when placed in front of guests.

Don't believe me? Well, good new! We've got some samples for you to check out for yourself. Below you'll find full text excerpts for some of DC Comics' biggest bads: the cosmic dictator Darkseid, the Flash's opposite number Reverse-Flash, and the quirky anti-hero team of the Secret Six.

Below that, you can find a gallery of finished pages from the book itself, included the entries for The Joker, Harley Quinn, Metallo, and the Legion of Doom.

Enjoy the excerpts below. DC Comics Super-Villains: The Complete Visual History is available in bookstores now.

"I love Darkseid, and I think he's the ultimate villain of the DC Universe," says Jim Lee, who redesigned the character for his "New 52" debut. "The costume is majestic and powerful but also very sinister. It's the battle armor of a villain who has triumphed in battle after battle, universe after universe. I wanted to make it look like something that was battle-worn but also like it protected the power and dark legacy that Darkseid has in the DC Universe."

That legacy began when legendary comics creator Jack Kirby signed on with DC Comics in 1970, bringing with him the promise of an epic "Fourth World" saga of New Gods and strange science. Kirby staked his claim to this mythology in issue #133 of Superman's Pal Jimmy Olsen (October 1970), and this ultimate villain made a shadowy appearance in the very next issue.

Darkseid was the iron-fisted ruler of Apokolips. Belching flame into space from the inexhaustible fire-pits on its surface, this martial planet labored under the yoke of fascism. Darkseid seemed carved from granite as he growled orders to his warriors and minions, massive hands clasped behind his back.

Absolute rule over Apokolips wasn't enough to satisfy Darkseid. He sought to obliterate the concept of free will by harnessing the Anti-Life Equation, and his pursuit of this prize brought him to Earth and into conflict with Earth's foremost defender, Superman.

"Darkseid is probably the only one of [Superman's villains] who is really far beyond Superman," says Superman writer Marv Wolfman. "He's the lord of an entire dark dimension."

The lore behind Kirby's Fourth World solidified in the pages of Forever People, New Gods, and Mister Miracle. A state of détente existed between Darkseid's Apokolips and its paradisiacal sister world, New Genesis. A political exchange of offspring had resulted in Darkseid's son Orion growing up in the care of New Genesis's Highfather, while Scott Free—Highfather's son—had endured the hellish tortures of Apokolips to become escape artist Mister Miracle.

Darkseid's powers befitted his status as a literal god. Gifted with invulnerability, longevity, super strength, telepathy, and telekinesis, he could call upon a host of other powers as needed. But his signature weapons were his eye-blasting Omega Beams. Once fired, the Omega Beams tracked their target around corners and disintegrated their victims on contact.

The greatest hits of Darkseid's early years include his formation of the Secret Society of Super Villains and the "Great Darkness Saga," which nearly wiped the Legion of Super-Heroes from existence a thousand years in the future. During the 1986 crossover Legends, Darkseid authorized a propaganda campaign to drive a wedge between Earth's citizens and their costumed protectors.

But even the great Darkseid died—along with all of the New Gods—during the run-up to writer Grant Morrison's Final Crisis in 2008. This surprise move set the stage for the character's rebirth in human form. Now calling himself "Boss Dark Side," he activated the Anti-Life Equation and placed Earth's inhabitants under his heel. Batman fought back, and their showdown seemingly ended in mutual annihilation as Darkseid took a radion bullet and Batman stood in the path of Darkseid's Omega Beams.

"It's hard for me to even think of Darkseid as a villain," admits writer Ron Marz. "He simply is what he is. Darkseid is a monarch, and he works on a grand scale beyond humans. He's the pinnacle of the cosmic food chain—grand in every way."

Whether he's called the Reverse-Flash or Professor Zoom, Eobard Thawne is a light-speed killer unhindered by the laws of space and time. John Broome and Carmine Infantino unveiled the character in The Flash #139 (September 1963). A resident of the 25th century, Eobard Thawne traveled into the past to meet The Flash and to meddle in the life of his alter ego, police scientist Barry Allen. Though he possessed the same abilities as his target—able to run faster than thought and phase through solids by vibrating his body's molecules—Thawne's colorswapped costume marked him as a true "Reverse-Flash."

"There is a simplicity to the Reverse-Flash," says writer Fabian Nicieza. "Barry Allen is a detail-oriented guy who moves at the speed of near-light. That's when details should be lost, and as a police scientist he needs to see the details. The Reverse-Flash is the opposite—he doesn't think about the details; he thinks about the big picture. The Flash is, in some ways, grounded in the now, but as a time traveler the Reverse-Flash comes from everywhere and invades the now."

Thawne's obsession with Barry Allen's wife Iris took an ugly turn after she rejected his advances. He attacked and seemingly killed her, forcing The Flash to snap his enemy's neck in order to save a second victim. In the subsequent trial, a jury found The Flash innocent of all charges.

"The Reverse-Flash's murder of Iris was one of the most captivating narratives of my childhood," remembers writer Sterling Gates. "The fact that Barry Allen broke his neck and was put on trial for it? It made for one of the best and most dramatic comic book sagas of the 1980s."

The Reverse-Flash didn't stay dead for long. During the early 2000s he became the unhinged nemesis of Wally West, Barry Allen's replacement as The Flash. When Barry took up the costume once more, the Reverse-Flash orchestrated a revenge scheme so thorough it rewove the fabric of existence.

This occurred in Flashpoint, a 2011 crossover in which the Reverse-Flash mangled the timeline and brought about an Earth with an alternate history. In a bleak new reality of warring Amazons and vengeful Atlanteans, the Reverse-Flash gloated over his creation. But letting his guard down proved fatal for Thawne when the Flashpoint-Batman stabbed him through the heart with a sword.

The Reverse-Flash of DC Comics' rebooted continuity is Daniel West. After the Rogues forced him into a Mirror World and robbed him of his possessions, he escaped by crashing an experimental monorail into a battery fueled by the Speed Force. The explosion gave him super-speed but fused his body with the monorail's shrapnel.

"Barry Allen is a problem solver, and the Reverse-Flash is a problemmaker," says Nicieza. "That simple dynamic is how the characters come into conflict, thematically as well as physically." 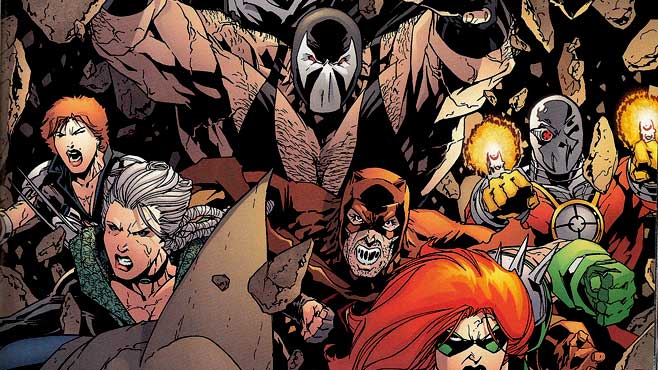 A half-dozen operatives who performed missions for the mysterious Mockingbird comprised the titular team at the time of its debut in Secret Six #1 (April/May 1968). A 1980s revival continued the secret agent template, but in the 2000s the team found new life as a showcase for B-list villains and the dysfunctional family dynamics that united them.

Deadshot, Catman, Cheshire, Ragdoll, Scandal Savage, and Parademon became the new Secret Six in Villains United #1 (July 2005), written by Gail Simone. At first the team had its own Mockingbird (later revealed as Lex Luthor), but the refusal of the Secret Six to sign on with the Secret Society of Super Villains marked its members for death.

Their trial by fire persuaded the surviving members to stick together. A Secret Six limited series brought fresh characters into the rotation including Knockout, the Mad Hatter, and Harley Quinn.

"They don't see themselves in that fashion, not as villains," explains Dan DiDio. "The Secret Six might be driven by self-interest, but they also have good things they accomplish along the way. They walk the line between hero and villain."