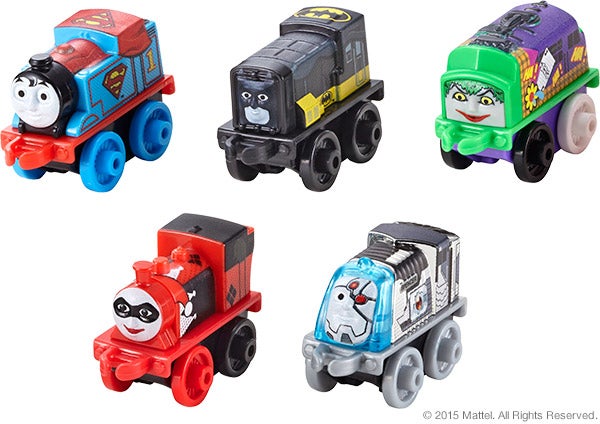 Mattel's Matty Collector Newsletter has provided fans with a first look at a number of this summer's Comic Con International: San Diego-exclusive toys and action figures, including a line of toy trains that blend the look of Thomas the Tank Engine with the familiar characters of the DC Comics Universe.

They're among a number of toys including Masters of the Universe and Ghostbusters II-exclusive action figures and a Raven Queen Ever After High figurine.

You can see a full gallery and official details from Matty Collector below. Click the link above for details on getting your hands on the DC and Ever After High toys, and this link for details on the Ghostbusters and Masters of the Universe exclusives.

Raven Queen never wanted to be the next Evil Queen. But she always wondered why her mother tried to take over all fairy tales. By accepting her destiny, Raven may find some answers, not to mention some wicked powerful magic! What secrets lie inside the looking glass? Only the magic mirror knows.

Do, re, Egon! When the Scoleri brothers make an unscheduled appearance before Judge Wexler, the professor of paranormal dispenses some justice Ghostbusters™ style. This commemorative 6" figure pays tribute to Harold Ramis, who created the character of the serious scientist.

Masters of the Universe® Rotar™ vs. Twistoid™

Recreate the Second Ultimate Battleground as Rotar™ and Twistoid™ go head to head!

A former palace guard wounded in battle, Rotar™ was merged with an android body resulting in fists of fury fueled by his hyper spin powers. He now protects Eternia® as one of the Masters of the Universe®!

Previously sold only during our February 2015 Early Access sale, everyone's favorite drones of destruction are joining the list of products available for pick-up at SDCC. Each pack comes with three sets of hands, a sticker sheet, and three stands.