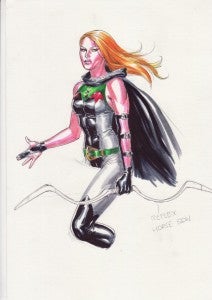 When DC Comics revealed that Barbara Gordon would be walking as Batgirl in the new DC Universe, many fans questioned the change, because as the paraplegic Oracle, Barbara Gordon had been one of the few comic book characters with a disability. At San Diego Comic-Con, DC Comics told fans to be patient that they were working on introducing new characters.

Demon Knights is set back in the Medieval Age, so The Horsewoman actually gets around on a...wait for it....horse (didn't see that one coming, did you?). In fact, The Horsewoman has an absolute affinity for all horses (which is why they call her Horsewoman rather than Archerwoman). According to DC Comics, The Horsewoman is supported in her saddle by magic and invention. Demon Knights #1 is scheduled to arrive in comic book stores on September 14, 2011.