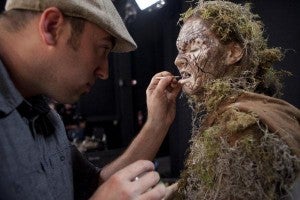 Fans who are always complaining about Jim Lee's New 52 redesigns will have a chance to see how he stacks up against some of DC's other artists next week when Lee joins a number of DC creators in a design competition on Syfy's Face Off. Lee, Mark Buckingham, Cliff Chiang, Tony Daniel, David Finch, Nicola Scott and J.H. Williams III will compete alongside the contestants on Face Off to design and create a superhero; the spot was filmed at San Diego Comic Con International last year and the winning design will be featured in an upcoming issue of Justice League Dark. The episode will air January 22 (next Tuesday) at 9 p.m. Eastern and Pacific on Syfy. According to the network, Face Off, Syfy's highest-rated unscripted program, is an authentic depiction of the high creative standards necessary for a special effects make-up artist to succeed in their craft.  The contestants will be whittled down week by week as they compete to outshine their competition.  The winning artist will receive $100,000, a 2013 Fiat 500, and will also be given the opportunity to become a guest lecturer at the MAKE UP FOR EVER Academies in New York and Paris.

DC Comics Will Take Over Syfy's Face Off Next Week