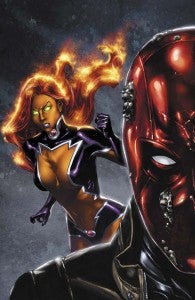 It's been an interesting month, and it seems like it's been a long time since DC Comics released solicitation text for their April comics two weeks ago and we took some time out to guess at what the surprises on the other side of the Justice League books' gatefold covers might be. Well, with the gatefold promotion now tastelessly named "WTF Certified" and at least three titles already leaked, we figured now was as good a time as any to take a look at the Batman titles and see whether we could suss out what these things mean. We'll start with some of the material that we've already covered, just to get them out of the way. Also, there are some books about which I have no particularly good guesses. I'll just leave those off rather than wasting the time. 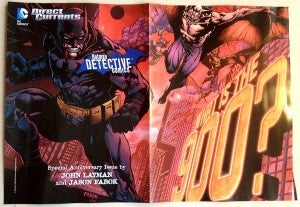 Detective Comics #19 Perhaps better known as Detective Comics #900, this issue's fold-out cover already seems to have been released in Previews and tells us...well, not a ton. It tells us that Man-Bat is in the book, and that he probably has something to do with the mystery of "The 900" that DC has been promoting for a while. This could also be a promotional mock-up just to put in the Previews, but that doesn't feel like the case. More likely than not, DC decided that pushing the Detective Comics #900 angle was more important than fidelity to the "a surprise on every cover" philosophy. Fine, then. No great harm. 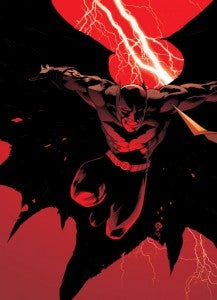 Batman & Robin #19 We've dealt with this question a bit before. It wouldn't surprise us to see a new Robin introduced on that page; while, yes, our initial suggestion that Damian has a black top over his cape was wrong (he has a yellow cape and that black hooded thing), that wasn't the only thing pushing us in the direction of believing he might not make it to the end of Death of the Family. While that's looking less and less likely as the story drags on, there aren't many things that would be more "WTF" than Bruce taking on a new Robin. Somebody else, though, who's been conspicuously absent from the New 52 and who has occasionally worn a cape with yellow edges (albeit a ceremonial one, not a costume): What about Ra's al Ghul? Seeing him for the first time in a while might be a game-changer, especially coming on the heels of a traumatic experience for Damian, which Death of the Family certainly constitutes, even if he makes it out physically unscathed. 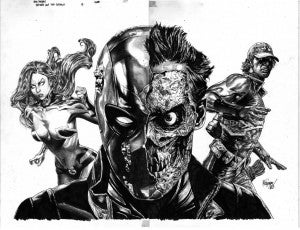 Red Hood and the Outlaws #19 Golly, what a gruesome cover. At this stage, uncolored, it's appeared on the Internet today after cover artist Mico Sauyan put it up for sale on his original art page...well, it's hard to say what this means. Many fans are speculating that it's just what it looks like: Joker took Jason's face in Death of the Family and we'll finally get a good look under the hood a couple of months out. After all, we have seen Joker messing with the captive Jason's helmet. And since Red Hood is a former identity of Joker's, it sort of makes sense to give Jason an approximation of his own visage. It could also be, some have speculated, Joker actually taking on the role of Red Hood. One could make a case, I suppose, for it given that he's suddenly decided to be the anti-Batman with his weird crime religion. But it's very, very unlikely. The best bet is that it's a figurative cover, dealing with Jason's emotional scars from the story, and that when we finally see the book this cover will not be literal. The "WTF," then, is simply the shock of this gruesome image. If so, it works. 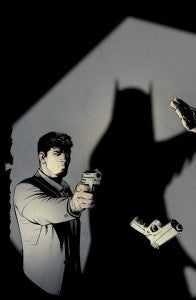 Batman #19 Who could cause Bruce Wayne to use a gun? Geez, this is a pretty basic cover. Your guess is as good as mine, although didn't Scott Snyder tell us that both Two-Face and The Riddler would get stories in 2013? "There was some talk, honestly about the Riddler, maybe making him a character who is scarier in terms of the games he played. Sort of like Jigsaw from the Saw movies," Snyder told ComicVine back in September of 2011. "But at the end of the day we really loved the characters as they are. "It came down to instead of radically changing the designs of any of them to people coming up with good stories for the characters as they are. The discussions about this stuff lead to huge fun stories that are coming with the Joker in a really big way, with Two-Face…it lead to us saying we don't need to reboot them because this is the story I want to tell." So, one of those two, maybe? If I had to guess, my money's on Two-Face. Why? Well...

Batman Incorporated #10 This is just begging to be a Two-Face cover, isn't it? Of course, the Morrison books aren't really tying in with anything else, so probably it's unwise to make predictions about the rest of teh line based on speculation about this title. Also, we've pointed out before that if they were to kill Robin or somebody, this could be hiding a glass case on the other side of the cave behind Bruce. 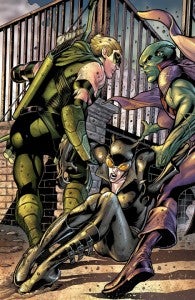 Catwoman #19 Catwoman needs help—but what is the only place the Justice League of America can take her? Well, that's pretty obviously Arkham, isn't it? Hard to imagine it being anywhere else. Talon #7 shows him apparently dead and the Court of Owls standing idly by, teasing that if they didn't kill him, who did? I'd like to see it be Azrael, since they're basically the same character, but I'm guessing for shock value it'll be Batman standing there, and another metaphorical cover. Nightwing #19 is pretty obviously the appearance of The Creeper that DC teased. Batgirl #19 is obviously her brother falling, from both Jim Gordon's expression AND the solicitation text. The real question becomes whether he actually dies and, if it happens, does that make him the likely candidate to be the character Simone was reportedly being pressured to kill?