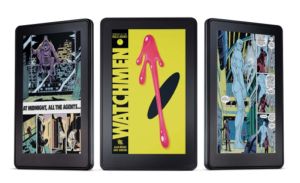 As most digital comics consumers (and many others) noticed this week, DC Comics and Marvel Comics both launched substantially earlier than usual digitally. In both cases, it has to do with new features being rolled out on their digital comics--but only one of the publishers continues to keep it up.

"The digital comics release timing today was not a glitch," DC Entertainment told ComicBook.com when reached for comment. "Our goal is to provide parity across all platforms, including release times." The publisher added that the release times are actually set by the platform for all of their products, not just DC's and not even just comics in the case of Barnes & Noble, Amazon and Apple, whose digital storefronts began carrying single-issue digital comics for the first time this past week. As far as we were able to determine, new content goes live on midnight or shortly thereafter on all of those platforms.

It seems clear that the 2 p.m. embargo previously placed on ComiXology in order to keep brick-and-mortar retailers from feeling undercut was lifted in order to keep ComiXology competitive with those other digital marketplaces, although DC didn't have any comment to that effect.

As to DC's claim that the times are set by the platform, that may be true for the larger markets, but when reached by Twitter, ComiXology support says that release times on the app are set by the publishers.

That's a key distinction because when contacted about the situation, a rep for Marvel downplayed what happened this week, suggesting that it was a one-time technical problem related to the roll-out of their just-announced digital pre-order system. He stopped short of saying that Marvel wouldn't be changing their release times, although frankly Marvel's releases have always tended to go live somewhat earlier in the day than DC's hard 2 p.m. on-sale time.

My Hero Academia Cosplay Features The Final Form Of Midoriya

Here's Why The Legend of Zelda: Breath of the Wild 2's Actual Name Is Still a Secret

Is WWE Bringing Back the King of the Ring Tournament?

Will WandaVision Get A Season 2? Marvel's Kevin Feige Responds