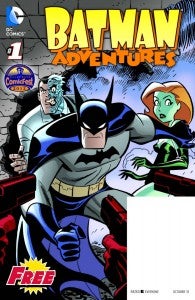 DC Entertainment has just announced that their contribution to next week's Diamond Comics Distributors Halloween ComicFest--basically a Free Comic Book Day for the second half of the year--will be a Batman/Scooby-Doo flipbook, reprinting classic material from fan-favorite, all-ages books.

"DC Comics fans will be excited to learn that comic book stores nationwide will be distributing the all-ages Halloween ComicFest exclusive BATMAN/SCOOBY DOO! Flipbook for FREE! Reprinting classic BATMAN and SCOOBY-DOO tales, this collection comes to you from the creative teams of writers Dan Slott and Chris Duffy and artist Ty Templeton amongst various others.

"In his side of the comic, The Dark Knight meets Gotham City's new vigilante, the Cavalier, and battles the evil of Ra's Al Ghul in stories from BATMAN ADVENTURES #1 and #4. And in the other side, the Mystery Inc. Gang tries to get to the bottom of 'The Costume Caper,' in a story from SCOOBY-DOO, WHERE ARE YOU? #2."

, born out of Batman: The Animated Series from Paul Dini and Bruce Timm, is one of the most beloved all-ages books in recent memory. While much of the series is available digitally, that's a format better-suited to somewhat older readers and there are few physical reprints of all-ages books, including this one. The series ended some time ago, in no small part because DC tends to stake their all-ages catalog to what's on TV at the moment, meaning that as each new series ends, its comic book counterpart does as well, making way for the next show to take over its spot.