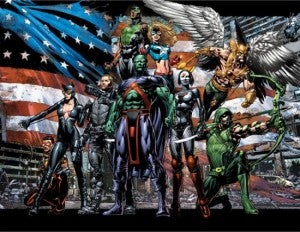 Back when Justice League International headed up a handful of titles led to the slaughter and ushered in some comics that started with this month's zero issues (namely Phantom Stranger, Sword of Sorcery and whatnot), there was a rumor that Katana would star in her own ongoing.

This seemed to make some sense at the time--the character is going to be a major player in the forthcoming Cartoon Network series Beware the Batman, which after the fairly all-ages feel of The Brave and the Bold seems poised to be a somewhat more grown-up cartoon.

The publisher, though, brought their total number of comics to 52 by introducing only those and no more, prompting fans to wonder whether that speculation was baseless, or whether there were just more comics (and by extension another wave of cancellations) coming soon.

That could very well suggest that either the February 2013 solicitations will be full of surprises...or that Rob Liefeld is right and there may be a New York Comic Con bloodbath in advance of some announcements. He tweeted last night that fans should expect to say goodbye to Blue Beetle, Grifter, Legion Lost and Frankenstein, Agent of S.H.A.D.E. at this weekend's DC panels.

She's a member of the Justice League of America and has starred in Birds of Prey, so clearly DC feels that this nonwhite, nonmale hero could be somebody they want to keep on the fans's radar. That said, if she's appearing in one or more major team books already it seems like a poor investment to launch her own series--except, of course, that Batman has about 33 of them and rumor has it he's getting one more.

This one's a long shot, but it was a shot that was somewhat called by Geoff Johns in the Justice League International Annual. The team, minus Booster Gold, will apparently grow up to be the Global Guardians, an oft-revamped team of also-rans who appeared in JLI comics during the DC Universe pre-New 52. Could those characters get their own books? It's unlikely--not only is there not a big name for DC to hang promotional art on, but isn't there a Guardians of the Globe comic going on over at Image right now?

Another title that could be extrapolated, if one were so inclined, from the Justice League International Annual, a New 52 Time Masters would likely be a Booster Gold series by any other name, featuring (as did Booster's last solo series) Skeets, Rip Hunter and other characters that we've so far only heard of or from and not actually seen in the New 52.

The thinnest of all possible sources, Rob Liefeld, announced that this would be one of DC's big NYCC plans. It would be easy to ignore if not for the fact that it's frankly so obvious; we've seen very little of the way the two characters interact in the New 52, and the Superman/Batman dynamic is one that's been mined for countless great stories over the years.

Besides that, Superman and Batman are two of the best-selling characters of the New 52 and one of the things we've see, particularly in the Batman offices, is that DC's editorial philosophy seems to be to reward titles that perform with spinoffs and tie-ins. 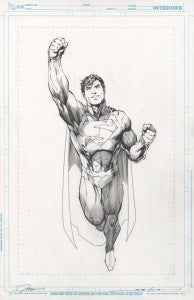 Arguably the most obvious title on the list, this comic has about 1:1 odds, and will likely be announced tomorrow, either online (as they did with the Action Comics changeover) or at the Superman panel, which is set to be DC's first major panel land will be held on Thursday night. That seems like the kind of thing done by design, with the idea in mind that DC would like to dominate news coverage of the convention's preview night, to us.

Scott Snyder, writer of the best-selling and critically-acclaimed New 52 take on Batman, will reportedly be joined by Jim Lee, currentely the artist on Justice League, to take on Superman just in time for the new movie to be released. Assuming that any or all of the information we're hearing on the rest of these titles is true, though, that leaves us with just one big question: Will Jim Lee really try to launch a new title with only a month or two of rest, or will the next "wave" take a while to reach us?

DC Comics's New 52: What Could a New Wave Look Like?