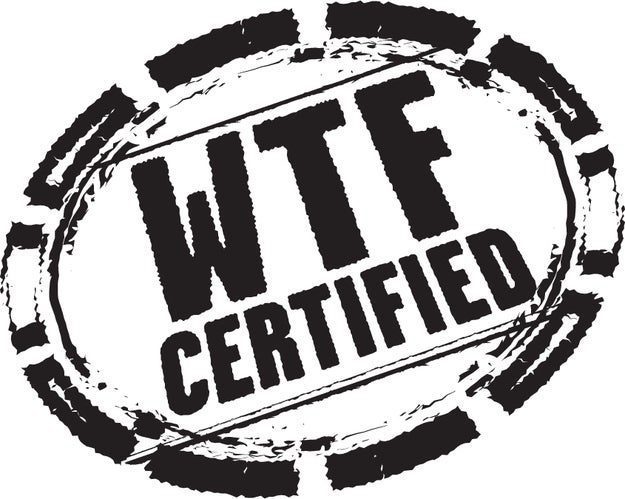 Fans who got a look at the new Previews out yesterday would have noticed that DC Comics's New 52 covers were all stamped with a "WTF certified" logo. What's that all about? That's the question that Buzzfeed is asking, and they've got a few kinda-sorta answers from DC. What does it mean, they ask? Well, of course anyone who's been paying attention knows what it means--each of the issues has a surprising plot twist inside, and it's reflected on a gatefold cover, only one half of which appears in the solicitation for the issue. What clues did DC share with Buzzfeed, though, and what might they mean?

Booster Gold reappears while an entire team disappears We already know from the solicitation text that Stormwatch disappears, and another team rises up to replace them. It had been widely assumed that the team that replaced them would be led by Apollo and Midnighter, and that it might include Lobo, The Weird and the other character seen in Jim Starlin's Facebook teases. If these two things are related, though--Booster's appearance and a team's reappearance...could it be that the new Stormwatch is actually going to be related to the "Justice League International" team we saw from R.B. Silva? It could work, with Booster Gold's "Time Master" persona still intact. That's probably not likely, since we've already seen what appears to be the lineup for the new Stormwatch (or parts of it, none of which sync up with the Silva team) and since Silva's tags didn't suggest anything of the sort. So, more likely than not, Booster is unrelated to the disappearing team except that his reappearance happens around the same time. Or does that mean we could see two teams of DC heroes disappearing in the same month? Curious...! Also, let's not forget that Justice League Dark has a suspiciously Booster Gold-inspired plot device going on quietly in the background right now. And last but not least, the final issue of DC Universe Presents DID tease a time-displaced hero's return. We dismissed Booster among a crowded field of other possible candidates but maybe that was premature. 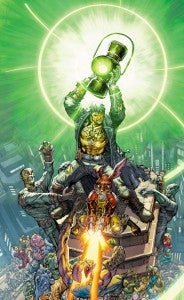 One team is trapped in a bottle while another is changed completely Given the fact that the Bottle City has reappeared in the H'El on Earth story in Superman, it seems like that would be the obvious place to look for a bottle to trap people in.  What team would that be, though? Supergirl isn't presently part of a team, Superman is part of the Justice League and they don't seem like ideal candidates. Superboy is on Teen Titans which would be a candidate but doesn't fit the solicitation. There's a cosmic entity who's got Threshold's The Hunted trapped, though...could that be Brainiac? With Morrison's Action Comics done, his characters and concepts are probably no longer verboten. As far as a team that's changed completely, the best candidate (besides the aforementioned Stormwatch, but it seems they're probably talking about different groups in the different questions) seems to be Suicide Squad, where the volatile team will be getting a new leader that nobody's happy about. There are some other options out there, too--The New Guardians and Birds of Prey both have fairly ominous solicitations and the Red Lanterns appear to be finally completely revolting against Atrocitus, which is not likely to end well for much of their Corps. 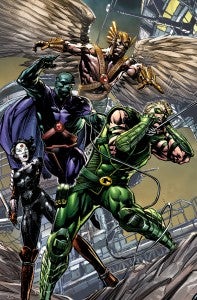 Some heroes change their colors and other change allegiances

Geez, apparently April is just "treason month" at DC Comics. Pandora battles to the death That's gotta be Phantom Stranger, right? Unless she's the ghostly apparition haunting Constantine, which might also make sense given the fact that DC changed the writer of that newborn series to be one of their most trusted and best-selling guys. A close encounter of The Dark Knight kind Well, Batman is missing in action as Gotham crumbles in the actual Batman: The Dark Knight title. Is he off-planet on Justice League business? It could also have to do with the 900, or with the two mysterious people he encounters in Batman and Robin or Batman. This one's tough to get a grip on because the comics aren't the movies--Batman is doing "alien" stuff all the time. 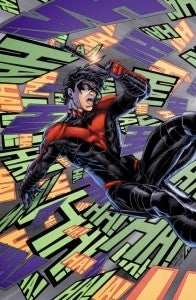 There's a new, old Creeper and some old New Gods. Nightwing, where the pervasive "Hahahahahaha" all over the cover had already led many to believe he'd meet the Creeper; Wonder Woman, where she's facing down Orion and things are getting desperate. Does she turn to someone who can bring other New Gods into the fight? One hero quits, and another hero dies As far as who dies, the obvious choice is Talon, who the solicitation says is killed, but that would obviously be a trick. Other options include members of the Legion (is there a way to save all of them?), Phantom Stranger (who slayed him?), Andrew Bennet (will he survive?), Jonah Hex (certain death for Jonah Hex), any member of Suicide Squad (will they stay or die?) or The Ravagers (...brings death to the Ravagers...). And Batwing quits. It says so right there.