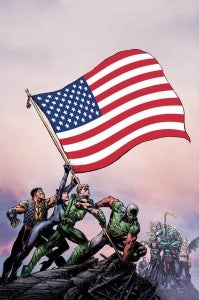 It appears as though the 52 variant covers on Justice League of America #1, announced last week and officially solicited today, will be the last great hurrah for the current DC Comics variant cover program.

In an interview with ICV2, the company's Senior Vice President of Sales, Bob Wayne, likened the too-frequent use of variants to draw attention to a book to eating nothing but junk food.

"It’s like having a balanced breakfast in the sense that if you only have variants and you don’t have other aspects of how you try to get the attention of retailers and through retailers to consumers, it would be like only eating pizza," Wayne said. "We’re just trying to make sure we keep a balance between the different ways that we can draw attention to books."

The practice, common in all three of the biggest American comics publishers, is perhaps best exemplified by the one-two-three punch of The Walking Dead #100, Uncanny Avengers #1 and Justice League of America #1, each of which had a truly absurd number of variables, each greater than the one before it. Both The Walking Dead #100 and Uncanny Avengers #1 reportedly sold more than 300,000 copies but drew the ire of a number of fans, pros and the comics press.

"Fifty-two covers is sickening," tweeted Image Comics co-founder Erik Larsen following DC's announcement last week. "It's obscene. It's not 'just fun' it's hurting everybody else. It's harmful. It's gross." He later added, "The short term money grubbing in comics is sickening. It nearly killed comics in the '90s. Was nothing learned?"

His reaction wasn't out of line with many seen online that day, both from professionals and from fans. A number of commenters on ComicBook.com's Facebook page called for their fellow readers to just stop buying the variants altogether.

On their future plans for the program, and why the publisher opted to "go big" before giving the strategy a rest, Wayne explained, "Overall we’re running in the zone of Spinal Tap in that we’ve got it up to 11 on [the Justice League of America variants].  We’re going to pull back and drop variants from a handful of titles in the next solicitation cycle to pull back that number ourselves, where it didn’t seem the variant was making a substantial difference in the buy-in for the book or the perception of books.  We’ll be looking at the remaining titles that have variants the following month."

That would put a potential moratorium on variant covers, line-wide, at DC taking effect with the April issues, just in time for the second anniversary of the New 52 and the presumed launch date for Scott Snyder and Jim Lee's Superman title, both of which will likely be events that DC wants to market aggressively. It may be that fans will get a look at what other ingredients DC has on their breakfast menu pretty quickly.