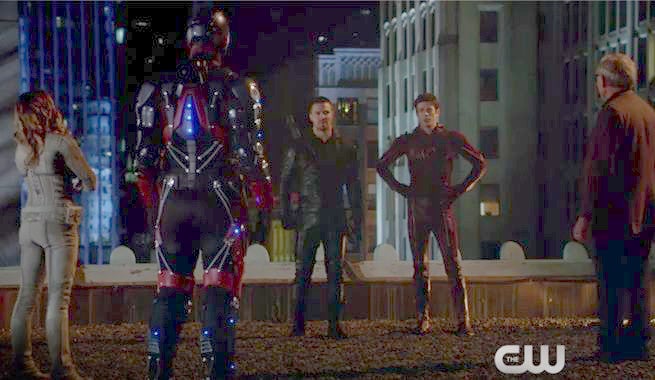 DC's Legends of Tomorrow got a lot of buzz at The CW upfronts Thursday in New York, thanks to a promo image, a trailer, and some news about the characters. The show, the third in the DC Comics TV Universe that has been established on The CW will also begin filming sooner rather than later, in July, in fact – but there's a twist.

Actor Victor Garber, who plays Dr. Martin Stein in the spin-off series, revealed to ComicBook.com that they'll actually be filming an episode of The Flash first, to help tie the two series together and answer some of the questions about characters like Stein going into the new series' launch.

"I will appear on The Flash again, filming this July, before Legends of Tomorrow starts up. That will setup the team and what's next for Martin Stein, and serves as sort of a preview episode," Garber said.

Whether or not they'll go directly into full production on the series, which will serve as a mid-season replacement on The CW premiering sometime early 2016, he couldn't yet say. With confirmation that Arrow and The Flash will crossover at least once annually, though, it's clear that this CW DC Universe will keep its connections from show to show (and now, to show) strong.

Stay tuned for more from Victor Garber about playing Martin Stein and the DC TV Universe, and much more from The CW 2015 Upfronts