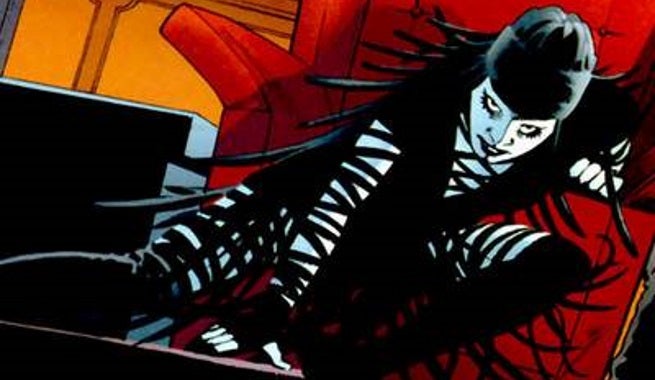 This is a pretty obscure character to reach for, even for Deadpool. Negasonic Teenage Warhead was created by Grant Morrison and Frank Quitely during the opening arc of New X-Men, “E for Extinction.” She was a part of Emma Frost’s class for psychics on Genosha, and died during the storyline's wild Sentinel assault on the island nation of mutants.

During the events of Joss Whedon and John Cassaday’s Astonishing X-Men, Emma’s grief over the fate of her students allowed her to be manipulated by Cassandra Nova, the sociopathic twin of Professor X who orchestrated the Sentinel attack in the first place. Emma created an imaginary Hellfire Club to fight the X-Men, and included Negasonic Teenage Warhead in the roster.

The real Negasonic Teenage Warhead was resurrected using a techno-organic virus by the vampire mutant Selene during the Necrosha event, only to die once more when the crisis was over.

She got her name from this Monster Magnet song:

Negasonic Teenage Warhead’s power set is purely psychic, but as THR notes in their report, Hildebrand is undergoing physical and stunt training that seems to suggest she’ll take a more physical role in the film. Though she was not a Morlock in the comics, her outsider appearance and attitude wouldn’t be out of place with them. Perhaps she’ll join Angel Dust, the similarly obscure mutant being played by Gina Carano, as part of the film version of the Morlocks.