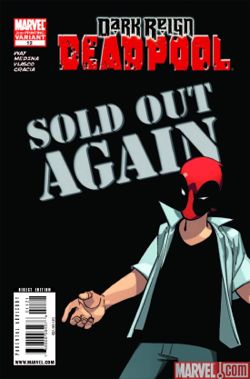 Marvel Comics, which is celebrating its 70th Anniversary this year, has announced second printings for many of its recent comics. Now, Marvel has announced that Deadpool #12 has sold out at distribution and will also be getting a second printing. What's unusual about this second printing is that the cover variant actually contains the words "Sold Out Again." Marvel Comics also issued a press release, which contained a humorous quote from Deadpool himself. According to the press release, Deadpool said "I hope someone is going to reimburse me for all the bullets I have to waste after appearing in second printings for every one of my books in 2009!" Deadpool #12 is by writer Daniel Way with art by Paco Medina. The issue features a killer bout between Dark Avenger Bullseye and hot-shot merc Deadpool. The variant cover features the interior art of Paco Medina. The Deadpool #12 Second Printing variant is scheduled to arrive in comic book stores on Wednesday, September 16, 2009.

Jujutsu Kaisen Cliffhanger Has One of Yuta's Friends in the Balance