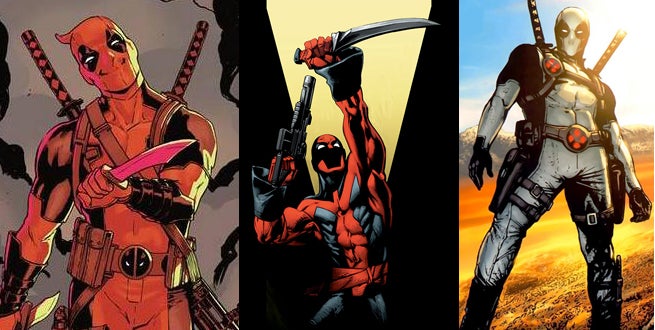 With Deadpool's costume for his eponymous movie from Fox coming Feb 12, 2016 revealed, it's sure to draw comparisons, cheers, and groans from across the internet. Though we're not quite sure we're the last one will come from, as this is a very comic book faithful costume, the only thing we can think is that maybe someone out there was really hoping to see one of his alternate looks. There have been many over the years, that go from subtle tweaks to color shifts and all the way to the "what on Earth is this?

Here are five of the greatest, most well-known, or just ridiculous costumes Deadpool has been seen in over the years. 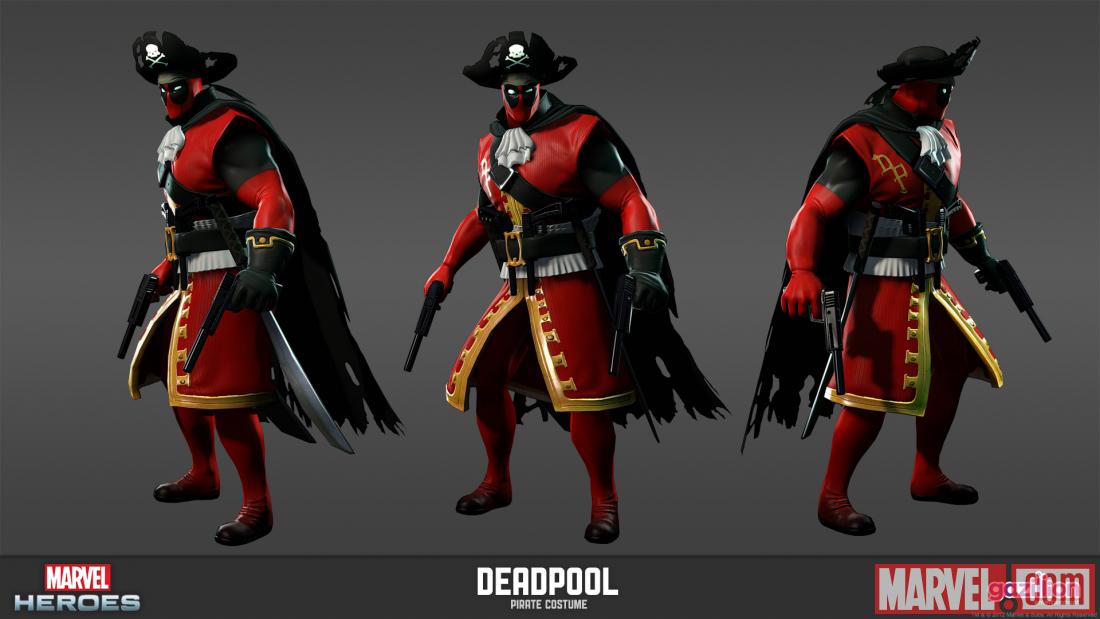 Pirate Deadpool? Why the Heck Not!

Deadpool did briefly don a bit of pirate gear in the comics, but certainly a few pages of a couple issues isn't enough to gain an entire following, resulting in later variant covers and the costume even coming to video games, right?

Not so! After Activision played lightly with the pirate look in their solo action game in 2013, Marvel Heroes from Gazillion Entertainment went the extra mile and took the full look from the cover of Deadpool #14, putting it into the game as an alternate costume for Deadpool. This look includes a pirate captain's coat, a wide sash, frilly undergarment, and of course, the pirate hat with the skull and crossbones. Maybe Deadpool will run through a costume shop in the Fox flick to nod to this for a moment.

When Wolverine assembled the new X-Force squad, he recruited Deadpool for the simplest of reasons: he's an efficient killer with loose morals and a nearly unkillable healing factor. Getting onto the squad meant changing his look a bit, too, to match the new covert looks donned by Wolverine, Psylocke, and the rest of the squad. Instead of red and black, this changed the primary color to grey. Otherwise it was essentially the same costume, just the darker, less attention-grabbing color palette. Well, less attention-grabbing until he runs up to you yelling a joke and shootstabbing (that's when he shoots you with a gun in one hand and stabs you with a sword in the other simultaneously) you. Then, you'll notice him anyway.

Deadpool has claimed he's an X-Man many times. In fact, sometimes it gets a little sad, as it seems like he'd really like to be welcomed by them. To that end, he's also put on various versions of an X-Men costume, be it some random blue-and-golds with his regular mask, or his costume when he became a Brotherhood of Mutants member in the future, basically his current one with a hood and goggles.

The best, and most "Yeah, I could see that if he was an X-men member" costume, though, came from Cable & Deadpool. And yes, this is basically Cyclops's costume or Cable's with a little extra flair to it, but he was even dedicated enough to make his mask into the blue and gold scheme. It needs a little more to differentiate itself from Cyclops (especially in this shot), but it's far from his worst effort in this regard. 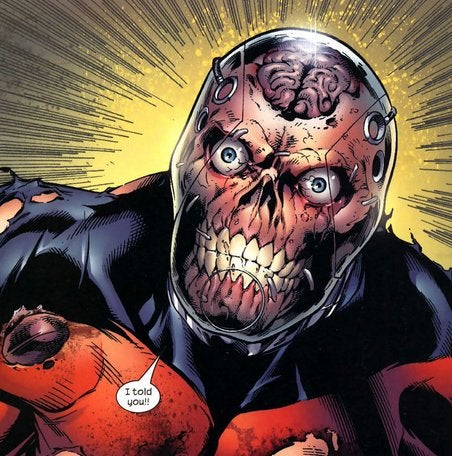 In the Ultimate universe, many characters have slightly different backgrounds, new looks, alternate powersets and sometimes even new identities. Ultimate Deadpool's look is instantly recognizable as the character, thanks to the heavy use of red and black. In this case, though, black is the primary color, with red used more sparingly as a highlight (in comparison to his standard look). He also has a couple of overtly ninja-like elements, like the black fold that takes up the entire mouth, nose, and eye area of his mask, or the red sash tied around his waist as if it's the belt of a gi. The more drastic change to his look came when he took his mask off, revealing his skull inside a clear plastic casing that has taken the place of all of his skin and cartilage. His brain is also partially exposed from out his skull. Yeah, don't see anything close to this being done on screen. 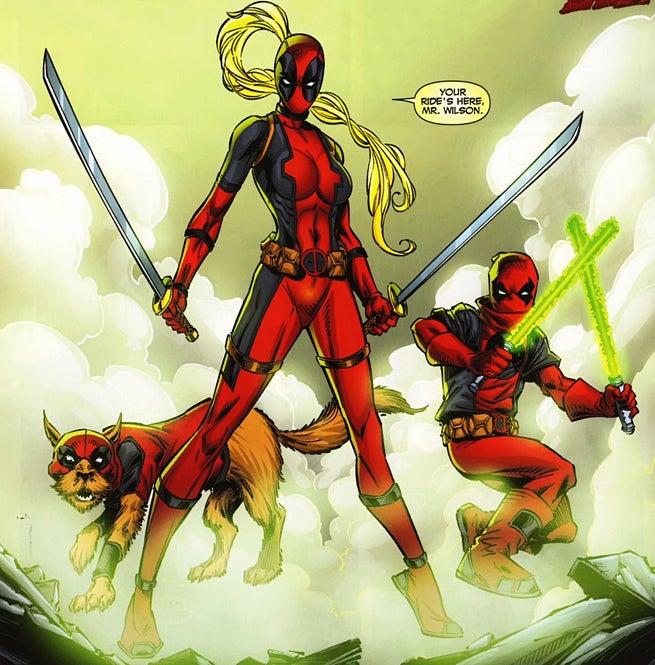 And Then There's the Lady. And the Kid. And the Dog.

You know what's better than Deadpool? Deadpools! Indeed there has been a whole corps of Deadpools running around the Marvel Universe, and the Marvel Multiverse, for some time now. The most significant of these are of course Kidpool, Dogpool, and the deadly Lady Deadpool. The costume stays mostly the same for his multiversal doubles. Wanda Wilson has spawned cosplayers, action figures (both official and custom), and a fanbase of her own. In fact, it was large enough that she became a variant for Marvel Heroes, complete with her own voice and unique movements.

Deadpool's Other Looks: 5 Best, Weirdest Looks for the Merc with a Mouth