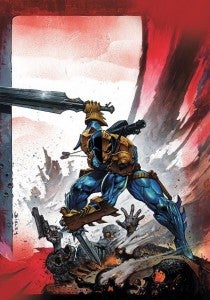 As I mentioned in my review of last week's Swamp Thing, one of the highlights of reviewing all fifty-two of DC's new number ones is the fact that I get to experience books and characters that I might not have ordinarily picked up as a fanboy and non-writer. These next two books have been paired in this review because I think they represent two characters that surprised me in ways that were both pleasant and interesting in regards to the concepts they attempt to convey. With Deathstroke, we have a villain that has fought pretty much every major hero and every major superhero team in the DCU and has more than held his own over the past several years against them. With Demon Knights, the demon Etrigan takes off in this work set against the backdrop of the Dark Ages. He, too, has been a consistent presence over the past few decades, his rhyming a frequent feature of his appearances. Both books have distinct voices that will certainly appeal to some factions of fans out there looking for "their" book in this new DCU, but I have to give a slight edge to Demon Knights at this juncture. Deathstroke #1 presents to us a character in Slade Wilson who has racked up quite a body count over the years as an assassin, body guard and mercenary. This new series gives us a Deathstroke that some are starting to suspect is past his prime and not as capable as he used to be, which a Russian man of great importance finds out, to his detriment, is not the case. The tale takes care to establish Deathstroke as an underdog, as interesting as that is, and pairing him with an obnoxious trio of wannabe guns for hire certainly helps, but the teen/young adults' banter and youthful exuberance chafe Slade. They also chafe on the reader a bit as too mined to maximum effect of obnoxiousness. There's a slight cartoony feel to it, like a Dennis the Menace Mr. Wilson rather than a Deathstroke Slade Wilson edge. It's a minor quibble, as Slade lets his new colleagues know how he feels about them in no uncertain terms later on. Grade: A- 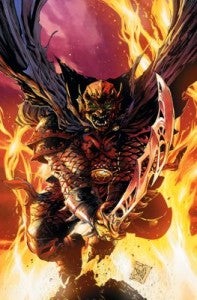 Over in Demon Knights, the Arthurian legends and the mysterious elements surrounding them collide into a tale with a hint of dark humor mixed into the sorcery and demon conjuring. With King Arthur's death and the fall of Camelot, Merlin must make use of a demon he has harnessed, and by latching him to the body of a mortal, he does just that. Etrigan is born, and with Madame Xanadu they travel on in search of their existence. A chance meeting in a tavern quickly derails those notions, as an evil queen and her sorcerer send trouble unexpectedly their way. Getting to see the human side of Etrigan, his "Jason" side, is a nice piece, and the dialogue works well in this opening issue. It has a tongue in cheek sensibility about it that nods to the modern reader in some of its phrasing and nuance. It preserves the feel of the era and the magic we want to believe existed then in a way that makes it quite a pleasure read. Throw in an evil queen with her own magic man, and hey, I'm sold! Grade: A