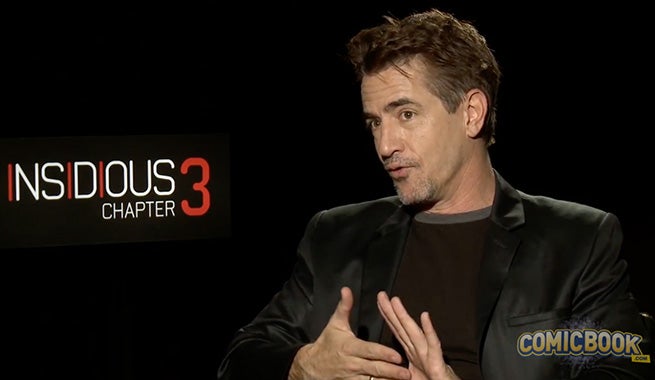 This weekend, the cast of Insidious Chapter 3 got together in Los Angeles to promote the film which is only a few short weeks away. On hand were Dermot Mulroney, Stefanie Scott, Lin Shaye, and director Leigh Whannell.

We had the chance to sit down with Dermot Mulroney, who plays widowed father Sean Brenner in the upcoming horror feature, for an exclusive interview. We talked all about Insidious and of course of bit of super heroes!

CB: I'm a fan of shows like The Walking Dead, I've watched The Purge, I've watched other horror movies, but Insidious Chapter 3 terrified me. I was covering my eyes! Do you ever get scared on set?

DM: This set was very interesting. Leigh... he insisted we did a number of things to create the mood. Most of the material I was in, we shot on a set of that apartment, the whole time we were there he kept the lights dimmed and even had the crew working in hush tones. The whole experience took on kind of a creepy feel.

I could imagine. Have you watched the movie yet?

Did it scare you?

It did! I watched it in a way that most people won't - alone in a high-tech screening room, the best digital sound and placement of the sound... It was a phenomenal experience and really creepy being alone watching this! I think I see it next week with a whole invitee fan audience so that's really the way to watch it. Horror movies, really, I credit for being one of the main influences that have kept going to the movie theater and watching with other people alive. So, it's really fun for me to be a part of one of these movies.

Did you have a favorite movie before you signed on to these ones?

Well, all of us on this movie love The Shining. Leigh unabashedly cites it as inspiration and you really can't top that movie. They're relatable to each other in that it's a contained space. The Shining obviously is big and more isolated, ours is more claustrophobic in this apartment building. You know, keep in mind, you can't really get out of an apartment without going down an elevator. It has a sort of creepier feel here. The Shining, The Exorcist… I remember being in a theater watching that original Halloween. That was the one that actually left a mark.

Yeah, that'll stick with you! This one will stick with you, too. Last night I wanted to take a picture of the LA skyline at night, so I turned off all the lights and one flickered back on just after watching this movie and it terrified me. I was like, "No! Oh, no!"

We did that, too. It's all part of the Insidious: Chapter 3 experience!

You've gone through so many different genres. Now you've done horror, you played a role on such a light-hearted show, New Girl, now, I have to ask - would ever want to play a super hero? I could see maybe the Punisher if you wanted to be mean.

I would love to be mean! Punisher sounds good and yeah, I'd go super hero any time they need me to. Standing by.

Do you have a favorite?

You know, I wouldn't be able to tell you. Let's go with the Punisher!

What's your favorite horror movie? Do you think Dermot Mulroney would be make a good Frank Castle? You can see him in action on when Insidious Chapter 3 creeps into theaters on June 5.