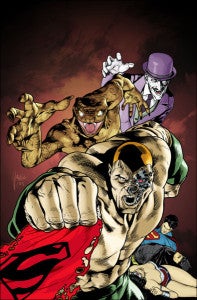 Lobo goes full villain as Darkseid, the Secret Society of Super-Villains and Dial E join him to take over Justice League in September. Covers for the four issues, which will be published weekly during Villains Month, can be seen at right and below. Lobo, currently appearing in StormWatch, will take over in Justice League #23.2, the week after Darkseid (which we knew) takes on Justice League #23.1. The recently-cancelled Dial H gets a bit of a revival as Dial E takes over in #23.3, with the Secret Society of Super-Villains unleashing Amazo in #23.4. And, not for nothing--but is that The Outsider at right? The guy in the purple suit looks like he's got Alfred Pennyworth's mustache, and since Joker is represented elsewhere and doesn't really look like that these days... The Outsider, fans will remember, appeared in Flashpoint but historically was an evil alter-ego that Alfred Pennyworth briefly took on when he was presumed dead during the Golden Age. It was widely speculated at the time that we might see the character rejoin the DC Universe after Flashpoint, especially since numerous attempts to launch a superhero title for the superhero team The Outsiders had failed to take root. Also pictured are Copperhead and Amazo. Here's the creative breakdown, according to Hero Complex, who have all the details, with Darkseid writer Greg Pak talking a little about the project:

There will be four "Justice League" books in Villains Month, led by No. 23.1 (Sept. 4), starring Darkseid, with writer Pak joined by artist Paulo Siqueira (cover by Ivan Reis and Joe Prado). Interstellar bounty hunter / killing machine Lobo lands in No. 23.2 (Sept. 11) in an adventure by Marguerite Bennett and Ben Oliver (cover by Aaron Kuder). Writer China Mieville and 20 artists (including Mateus Santolouco, Jock, Jeff Lemire and David Lapham; cover by Brian Bolland) debut 20 new villains in No. 23.3, "Justice League: Dial E" (Sept. 18), a coda to the "Dial H" series, which ends in August.

"We're exploring some of the unanswered questions around Darkseid's war on both Earth and Earth 2 in the New 52," Pak said. "We'll get a glimpse of some never-before-seen corners of his terrifying homeworld, Apokolips. And we may find out more about what exactly he had planned for Superman and the other victims in the horrific flesh-reprocessing chamber we saw in Justice League." [gallery ids="51880,52133,52134"]

Dial H Gets a Villains Month Revival, Amazo Comes to the New 52