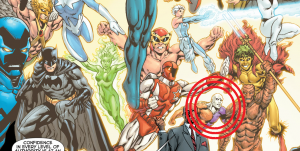 No great surprise that Johns, a co-writer on the show and DC Entertainment's Chief Creative Officer, should decide to lend them a few moments of his time to pontificate on Robot Chicken, the DC Universe...and to briefly strangle Senreich when he makes fun of Aquaman.

What was a bit more surprising is that he seems to suggest in the video that he's writing the classic DC hero Metamorpho, someone who has yet to appear in the New 52.

Actually, that's not fair. As you can see in the image at left, he has appeared--sort of--on a monitor in the background of Justice League International #1. Along with other missing-in-action heroes like Plastic Man and B'Wana Beast, it seemed at the time (and still does) that the issue served to do little more than establish that these people existed in the rebooted timeline.

"Now it kinda depends on who I'm working on, so I just like about everybody," Johns said. "Today, it's Metamorpho."

That certainly sounds to us like, "Today, I'm working on Metamorpho." Your mileage may vary, of course, but before you discount it, consider the following: In spite of the fact that we've only seen Rex Mason's handsome mug that one time since the relaunch (as far as we can remember--feel free to correct us if we're wrong), we did see Element Woman--his Flashpoint equivalent--in the Free Comic Book Day issue's teaser for Trinity War. In that same issue, the Orb of Ra was identified in the Raiders of the Lost Ark-style warehouse that Steve Trevor's ARGUS organization maintains. Johns has in the past established that Metamorpho's origins share roots with characters like Hawkman and Black Adam through the ancient Egyptian connections they all have, so it's not completely implausible that Metamorpho might appear in the Johns-written Shazam backup features in Justice League.

There's also always the small possibility Johns might take on an issue or two of The Savage Hawkman to get it back on track and prime the sales pump for whoever takes over following Rob Liefeld's abrupt departure from the title, although that seems farfetched.

In any case, expect to see more of Metamorpho, and soon, and in a Johns-written book.