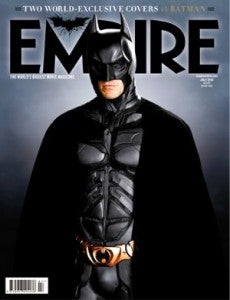 Empire Magazine is releasing a new issue on May 31, 2012 with extensive coverage of The Dark Knight Rises. In addition to having two covers featuring Batman and Catwoman, there are also 23 pages inside devoted to Christopher Nolan’s Batman trilogy.

Some of the pages from the issue have already made their way online via ComicBookMovie.com. In particular, one page shows a quote from director Christopher Nolan that seems to be generating quite a bit of discussion. Empire quotes Nolan as saying, “This is the biggest one I've done. The biggest one anyone's done since the silent era, in truth.”

Of course, the quote is presented by itself, so there’s no telling what context Christopher Nolan was making the statement. However, the obvious interpretation is that Christopher Nolan is calling The Dark Knight Rises the biggest film that’s been done since the silent era of movies. Depending on whether you’re a Chistopher Nolan fan or not, this quote comes across as either egotistical or the gospel truth.

Of course, it’s not only Christopher Nolan, who seems to think The Dark Knight Rises is something special. EmpireOnline.com has released a prologue to Dan Jolin’s article that will appear in the print edition of Empire Magazine. Here’s a quote from the article, “Empire has never before seen filmmaking on this scale. This is indisputably jaw-dropping. Huge. And it's no boast to say that to witness such a spectacle is a precious rarity in the early 21st century.”

The article goes on to compare The Dark Knight Rises stadium scene to the cast-of-thousands era not seen in movies since the 1925 version of Ben-Hur. The point being made is that while most Hollywood movies shoot on green-walled sound stages now that it’s not as impressive as shooting in reality, which i 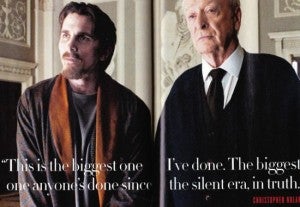 s how it used to be done and how Nolan still does it. So Nolan’s quote could be addressing the scale of his stadium shoot in specific rather than the movie in general.

Regardless of if Nolan' s quote was referring to the movie itself or the specific stadium scene, there are many that would argue the statement should apply to the movie itself. Let us know in the comments if you think The Dark Knight Rises will be the biggest movie since the silent era of films?

Did Nolan Call The Dark Knight Rises The Biggest Film Since Silent Era?