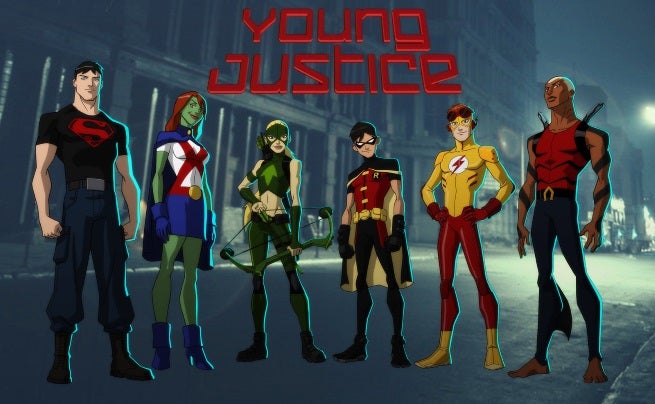 Yesterday, Warner Bros. released its full schedule for this year’s Comic-Con International. The company has a lot going on this year, including a full slate of programming for Sunday, Kid’s Day, the final day of the convention.

At noon on that day, they’ll be hosting a “Batman for All Seasons” panel, discussing the different versions of Batman that have sprung up over the years, including the animated iterations.

There’s an interesting line in the panel’s description though. Here it is:

Attendees who stick around to the end will be privy to a special WAC announcement that will excite fans both “Young” and old.

It’s a pretty innocuous statement, aside from that fact that “Young” is both capitalized and in quotation marks.

Could the special announcement concern the Young Justice animated series?

For those who don’t know, Young Justice was an adaptation of the DC Universe that aired as part of Cartoon Network's DC Nation block from 2010 until 2013. It focused on the younger members like Robin, Supboy and Kid Flash, and was loosely based on Peter David, Todd DeZago, and Todd Nuack’s comic book series of the same name. The series earned a devoted following thanks to its mature and complex storytelling and likeable, relatable characters. However, the series was cancelled after its second season, mostly because the toys and merchandise weren’t moving. According to Paul Dini, the people in charge blamed this mostly on the show’s significantly female audience. A videogame titled Young Justice: Legacy was also released following the show’s cancellation, with a plot that filled in year between the show’s two seasons.

While Young Justice is the most obvious answer for what “Young” could be referencing, it doesn’t fit perfectly. The announcement is supposed to be coming from the Warner Archive Collection, not Warner Bros. or DC Animation. That would seem to suggest that if it is Young Justice related, it would be an announcement about a DVD collection rather than a revitalization (which wouldn’t be unwelcome, considering how haphazardly the Young Justice DVDs were originally released and how hard they can be to find). Also, a panel about the odds and ends of the Batman mythos would be kind of an odd place to make a Young Justice announcement, even though Batman did appear in the show.

On the other hand, Young Justice co-creator Brandon Vietti is a panelist at the event. He may be there for other reasons – he did work on The Batman and Batman: The Brave and the Bold – but maybe there’s hope for Young Justice fans yet.

Did Warner Bros. Tease The Return Of The Young Justice Animated Series?