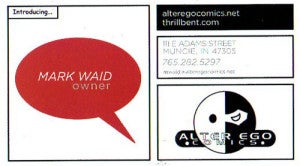 Mark Waid, the Thrillbent founder frequently singled out in recent times as an enemy to the comic book retailer for his commitment to digital comics, is now a comics retailer.

No, not at Thrillbent's digital storefront (although that, too)--Waid and Thrillbent writer/SuperMOOC instructor Christina Blanch have bought in to Alter Ego Comics in Muncie, Indiana.

"Alter Ego’s been pretty much a one-man operation forever; Jason’s been aching to expand, to move the storefront, to grow the store’s market and its community outreach…but while it’s always been a worthwhile enterprise, Jason could never stretch his time and resources enough to both run the store and evolve it," Waid explains at the Thrillbent blog. "Meanwhile, I–having to, on a daily basis, explain to most of the industry that championing digital comics with Thrillbent isn’t the same as “hating print”–had been thinking long and hard about what I’ve been preaching for a while, that print and digital can not only co-exist but feed one another for the overall health of the comics business. It sounds good to say, and I believe it–but with Thrillbent, I had the tools to actually prove only half that equation."

He notes that now, when he tells people that he's got the best interests of comics retailers in mind, they have to trust him.

Waid says, "This isn’t a vanity purchase, a symbolic gesture, or a silent partnership; Christy, Jason and I are each equal shareholders in Alter Ego Comics. I have skin in the game, and I’m eager to see what there is to learn about the only side of the industry I’ve never involved myself with."

You can read much more at the Thrillbent blog.