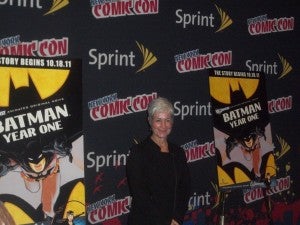 hits Video-On-Demand services, Blu-Ray and DVD today, starring Ben McKenzie as Batman and Eliza Dushku as Catwoman and featuring a Catwoman short on the disc as well. The film, based on Frank Miller and David Mazzuchelli's bestselling graphic novel, is the latest of DC Entertainment's PG-13 rated animated feature films. Andrea Romano, the voice director of the film, spoke with ComicBook.com at last weekend's New York Comic Con about the film. "I knew I needed someone who sounded quite young because the character is so much younger than where we've progressed with Batman," said Romano of giving McKenzie as the movie's lead role. "But I needed someone also that still has has that dark side and has that really good acting ability to bring all that was necessary for this particular role. I've loved Ben's work on Southland and so he came to mind." In fact, Romano said that she had approached Regina King--McKenzie's co-star on Southland with whom Romano works on The Boondocks--to get a feel for the actor. King told Romano that the actor would be a joy for Romano to work with and according to Romano, "In fact, he was." Romano said that McKenzie, who had never done voice work before, needed to learn some of the specific techniques unique to animation but that he didn't have much trouble adjusting and that he had been willing to put himself in her hands when he needed assistance. [caption id="attachment_8613" align="alignright" width="300" caption="Photo copyright Zach Roberts. Used with permission."] 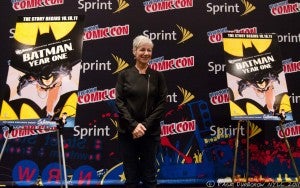 [/caption] In spite of the fact that many elements of Batman: Year One were already adapted to the screen for the purposes of Christopher Nolan's Batman Begins, Romano said that she doesn't see any conflict between the two films. "I look at the source material, I look at the script that I'm given to work with and then I go from scratch," she said. "I don't like to ever compare it to the live-action films because we're really different from the get-go and so I want to make it something that's new for us." Unlike previous DC animated features, Batman Year One includes a short film featuring the same lead actress (Dushku) who voices the same character in the main film. It's something Romano calls "a happy accident," explaining that once the animatics were in for Batman Year One, effectively giving the production staff a rough cut of the film, they realized that the movie had come up a little short. Deciding it needed a short packaged with it, Romano snatched up an available, existing Catwoman script by writer Paul Dini. "We were lucky enough to get Eliza and we'd been trying to get her for years on various projects and never could line up the schedule, and so it worked out great. She was available, and we were able to get the same actors to play the characters in either piece."