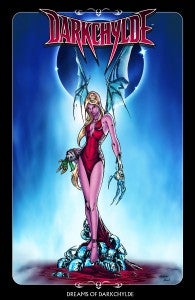 Image Comics has announced a new collection called Dreams of Darkchylde Vol. 1, which will feature accursed teen Ariel Chylde. This is the first time that the Dreams series has been collected into one volume, and it will feature new art and cover by Randy Queen. There is also a special foreword by none other than horror director John Carpenter, who has signed on to direct the film adaptation.

Dreams of Darkchylde Vol. 1 delves into the real world ghosts that haunt Ariel Chylde’s psychological terrain. In the main story, one of Ariel’s fallen childhood friends returns as an angry poltergeist, who is on a misguided quest for revenge against Ariel.

“2011 marks the 15th anniversary of Ariel Chylde,” said creator and artist Randy Queen. “So, it is with great joy this rare collection of Darkchylde material is made available for the first time in America with Image, and I'm thrilled to have John Carpenter's words open the volume. If you're an older fan, or newer fan, you'll find something fresh to discover in these haunted tales of the teen who can become the creatures from her nightmares!”