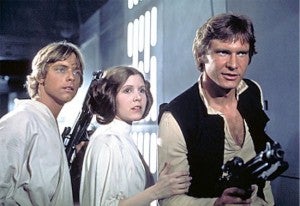 Carrie Fisher likes to joke that she will be reprising her role as Princess Leia, and George Lucas revealed that he pretty much had Carrie Fisher, Mark Hamill, and Harrison Ford signed before he sold Lucasfilm to Disney, but no one at Disney has spoken on the record when it comes to the original Star Wars cast. That is until now.

In an interview on CNBC's Closing Bell earlier today, Disney CEO Bob Iger confirmed that Disney was having discussions with the original Star Wars cast, while stopping short of making any type of announcement. When asked if the original Star Wars cast would return, Bob Iger said, “Well, George Lucas was quoted as saying that they would, but we haven’t made any official announcement yet.”

Bo Iger added, “We’ve got a team working on the film right now. J.J. Abrams is going to direct it. We’ve got a writer named Michael Arndt, who's actually writing the script working with some of the folks that were involved in some of the earlier films, and when the story is quote unquote broken, we’ll make decisions about the cast, and we’ll move from there.”

However, when pressed if they had been talking to the actors already, Bob Iger said, “Yes, there have been discussions already.”