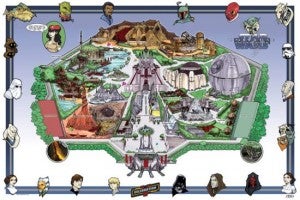 There have long been rumors of Disney creating a Star Wars Land theme park. Back during Star Wars Celebration V, artist Tom Hodges did a concept map drawing for a Star Wars Universe Dream Park. Back in June, a report surfaced that Disney was moving ahead with a Star Wars Land at Disney's Hollywood Studios at Walt Disney World.

At the Bank of America Merrill Lynch 2013 Media, Communications & Entertainment Conference earlier today, Disney CFO Jay Rasulo was asked if there could be a Star Wars Land theme park. “I think the sky’s the limit. There is incredible flexibility,” answered Rasulo.

“You know in the late eighties, George Lucas and Disney teamed up to introduce Star Wars into Disney Parks,” continued Rasulo. “There’s a Star Tours ride in every Disney location. And it was so natural for consumers, they got it right from the get-go. It’s been incredible popular. Most of them have been updated. Some will be updated.”

Rasulo added, “We did the Jedi Academy. So we know this is a good fit for our theme parks, and it’s an unbelievable pallet for us to create from.”