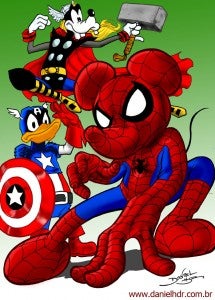 According to reports coming out of a Disney stockholders' meeting yesterday, CEO Robert Iger told investors that the company is developing plans to bring Marvel Comics characters to its Walt Disney World and Disneyland theme parks.

How this would be possible is unclear, as Universal is said in the Los Angeles Times article linked above to have theme park rights in perpetuity for Marvel's library, which they use at their Islands of Adventure theme parks, Disney's direct competitor. Whether those rights are exclusive or not is unclear, and what characters exactly are included is similarly unstated in the article, although having been to Islands of Adventure, there are few Marvel characters unaccounted for there who would be popular enough to bring in the kiddies if brought over to Disney. There are specific rides based on Spider-Man, Dr. Doom, the Hulk and Storm.

Iger didn't clarify which parks might be getting Marvel characters or when but, like the dissolution of Disney's publishing relationship with Boom! Studios, this move has been anticipated by many since Disney acquired Marvel back in 2009.

Disney looking to bring Marvel characters to its theme parks