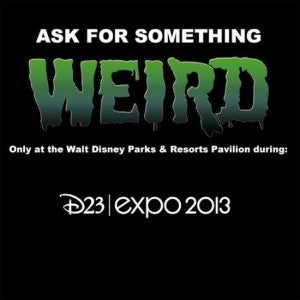 The Disney D23 Expo is this weekend, and it's sure to bring several surprises from Disney, Marvel, and Lucasfilm. In fact, Disney & Marvel are already teasing one such surprise.

A new teaser image bears the message "Ask for something weird." The "weird" is done as a creepy green logo. Accompanying the image was the text, "This weekend, only at the Walt Disney Parks & Resorts pavilion during the Disney D23 2013 Expo, ask for something WEIRD and get your first look at an all-new project coming from Marvel & Disney!"

Given the logo, the first thing that springs to mind would be the Marvel Comics character Man-Thing, and Iron Man 3 did lay the groundwork to introduce Man-Thing in the Marvel Cinematic Universe. However, the image was actually posted to the comics news section on the Marvel website, so it's likely a new comic book series rather than a movie announcement.