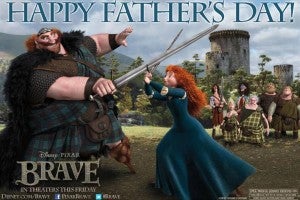 Looking forward to Father's Day tomorrow? Can't wait to see more from Disney/Pixar's Brave? Well, we've got good news for you, as the film sent out a Dad's Day-themed clip and now you can view it right here!

Check out the clip below, in which Princess Merida's strained relationship with her parents in the film gets a little bit of a break as it takes a tour of the film's flashback sequences, in which the king taught his daughter everything she would need to go through her rebellious phase later in life. It's a fun, funny and touching little montage in the way Pixar tends to do those kinds of things.

A grand adventure full of heart, memorable characters and signature Pixar humor, “Brave” uncovers a new tale in the mysterious Highlands of Scotland where the headstrong Merida (voice of Kelly Macdonald) defies an age-old custom and inadvertently unleashes chaos, forcing her to discover the meaning of true bravery before it’s too late. Opens June 22, 2012, in Disney Digital 3D™ in select theaters.

Disney/Pixar's Brave Has a Father's Day Message For You