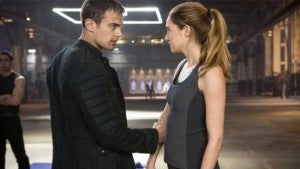 The first full trailer for Divergent premiered during the VMA Awards pre-show on MTV. The Divergent trailer has also been released online, and we've embedded it below.

Divergent is a thrilling adventure set in a future world where people are divided into distinct factions based on their personalities. Tris Prior (Shailene Woodley) is warned she is Divergent and will never fit into any one group. When she discovers a conspiracy to destroy all Divergents, she must find out what makes being Divergent so dangerous before it’s too late.