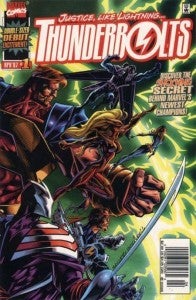 A little over a week ago, we reported on several new trademarks that Marvel had filed for in the category of downloadable electronic publications. Many of the new trademarks were for characters that had already been announced as part of upcoming movies or television shows. However, a few of the filed trademarks such as the ones for Alpha Flight, Strikeforce: Morituri, and New Warriors haven’t been announced as part of any upcoming television or movie projects.

Now, Marvel has filed some additional trademarks, and once again many of them are for characters associated with upcoming movies or television shows. Marvel recently filed new trademarks for Starjammers, Black Widow, Daredevil, Defenders, Drax the Destroyer, Eternals, Hawkeye, Heroes For Hire, Nova, Tales Of Suspense, and Thunderbolts. All of the trademarks were for the category of downloadable electronic publications, except for Starjammers, which was filed in the print publication category.

That so many of these trademarks are for characters tied into movies or television shows, makes us think that Marvel might be planning some type of digital comics line for characters associated with their television and movie projects. It would make sense because the new fans brought in by high profile media projects would probably be some of the most receptive fans to digital comic books. Could the other names on the list like Eternals, Nova, and Thunderbolts be other properties under consideration for development from Marvel?