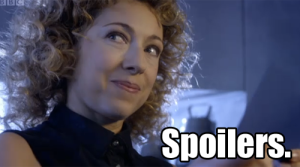 It's a recap folks so, I shouldn't have to explain this... but SPOILERS! As there are several Doctors in this one I used the actors name for the most part next to "The Doctor."And without any further ado - We begin.

We open black and white Doctor Who logo. Clara is teaching, at a blackboard we hear the name Marcus Aurelius (sadness...).

Clara at the school gets a letter from the Doctor. She Rides her motor bike to the address the Doctor gives her. She drives straight into the Tardis. Suddenly alarms start going off and the Tardis is picked up by a helicopter and flown over UNIT. Girl on cell phone has Tom Baker (4th) scarf on.

The Doctor calls Kate Stewart, ends up hanging outside of the TARDIS flying over London. 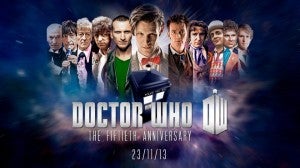 UNIT Director gives him sealed orders from the Queen - Queen Elizabeth the First. They walk into a museum of some kind - standing in front of a painting called "No more" Gallifrey falls painting - an oil painting... in 3-D. The Doctor (Smith) says "Doesn't belong in this time."

The Doctor explains the painting it s"the Last day of the Time War."

We cut to awesome, big explosions, lasers people being killed. Running people. DALEKS! 'Exterminate!" This is by far the biggest expensive-est scene I've ever seen in a Doctor Who episode - even counting the specials. They went all out.

We hear a soldier on Gallifrey say "Arcadia has fallen." John Hurt appears in voice first then on screen - "I'm going to need your gun."

The Dalek's start bussing "The Doctor is detected." We see "No More" being shot into a wall.

The Tardis breaks through that wall and crushes the Daleks.

In the war room of the Time Lords shows Daleks surrounding planets - a commander says that the "sky trenches" are holding.

They talk about the weapons they have left none other than 'The Moment" is gone - a weapon of mass destruction... stolen. By the Doctor.

Hurt stands in a desert carrying what I can assume is 'The Moment" goes into a barn. Opens 'The Moment" has Time Lord symbols all over it. Billie Piper aka Rose Tyler appears sitting on The Moment. She's the Moment's interface.

She calls him the Doctor, he responds - "I've lost the right to be called The Doctor" 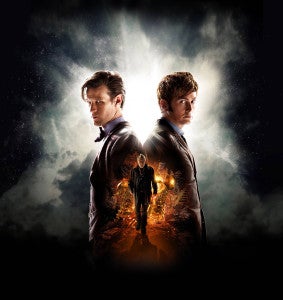 "The suffering, every moment in time and space is burning"

Rose/Interface talks to him about the consequences of using the Moment - Surviving using the weapon will be his punishment.

The painting is just Elizabeth's credentials - the letter from the Queen calls the Doctor her 'husband.'

Tennant appears on an oil painting with Elizabeth. Cut to the Doctor riding a horse with the Queen. They're having a picnic. The Doctor proposes - Queen says yes.

A machine that goes ding detects the Queen is actually a Zygon... oops, it not the Queen, it's the horse. Tenant realizes that he actually proposed to the Queen, and not a Zygon. Oh my. He realizes, "I'm going to be King."

The horse changes into a Zygon and a chase scene ensues - Doctor gets separated from the Queen - now there are two Queens. The Doctor stands trying to figure out which is which when a time fissure appears in the forest.

Cut back to the museum. We walk past Relics from past doctors. The Doctor stops as a fez in a glass case, Clara says, "Some day you can just walk past a fez."

They enter another room that has 3D oil paintings. Broken glass on the floor. Painting glass, broken, the Doctor (Smith) explains "from the inside."

Another time fissure, now one in the museum, Smith jumps in - lands back to the forest. After a moment of confusion both Doctors whip out their sonic screwdrivers. Smith's is larger. Tenant asks, "Compensating?"

Hurt jumps through the time fissure. Now there are three Doctors standing in the forest.

They're being held at spear point by the Queen's soldiers - Smith get's Clara to threaten them through the time fissure.

The Queen - whatever one it may be reappears and tells the soldiers to arrest the men and send them to the Tower of London.

Meanwhile back in the museum the girl with the scarf is anylzing the sand - it's the rements of the statues. Hiding under the cloth that once covered the statues are Zygons.

"So jealous of your pretty sister... I don't blame you. I wish I copied her." Not sure what that means... definitely know I'm missing something here.

UNIT's Kate Stewart leads Clara into the Tower of London - which has been 'Tardis proofed' stores a collection of Doctor related stuff.

Inside she shows Clara Capt Jack's Time Manipulator which was bequethed to UNIT on the occasion of his death... well one of them anyways.

The Doctor (Smith) is scratching the code for the Time Manipulator into the wall back at the Tower of London in Elizabeths time.

But, unfortunately the UNIT Director as already been Zygon'd - and has Clara cornered... just as the code is picture messaged to her phone. Clara types in the code and disappears.

Now back to the Tower of London in Elizabethan time - Three time lords talking about the Time War. They're talking about how many died when the Doctor (Hurt) destroyed the planet. Tenant says 2.47 Billion. Smith says he's forgotten - chose to forget.

Rose/Interface is in the room but only Hurt can see her. She describes the two younger Doctor's "The man who forgets, the man who regrets."

The three Doctors are trying to figure out how to escape.

Clara opens the door. Just as they're having a breakthough on how to disentegrate the door with their sonic screwdrivers.

The door to the cell in the Tower was unlocked the whole time.

Cut back to the The Zygons keep the people they morph into alive.

The Zygons hide in the paintings until the world is deemed ready to take.

Twist! The Queen appears, convinces the Zygons that she's one of them - but she still demands that the Doctor keep his promise. And so they get married next to the Tardis back in Elizabethan time.

All three are in the Tardis now which is freaking out a bit...it's Smith's -  Tenant: "Oh you've redecorated... I don't like it"

They're trying to figure out how to get into the Tardis Proofed archive. They get the "No More" painting moved (you see the phone call from earlier)  by one of the scientists into the archive and then go back to when the 'painting' was taken - thus appearing in it.

They make the Zygons and Kate stop the explosion that would destroy the archive and thus the city of London - having them sit down and discuss a truce. Force them to forget which is Zygon and which is human.

As they discuss terms Clara walks around the archive looks at the board with photos of old companions and Doctors. She talks to Hurt, she knows that he hasn't destroyed Gallifrey yet. He disappears back to the barn with Rose/Interface. Two Tardis' appear in the barn - they all put their hands on the big red button while Clara watches on.

Clara: "These are the people you're going to burn"

Smith: "Either I destroy my own people, or let the universe burn"

Smith: "Gentlemen I've have 400 years to think about this... I've changed my mind"

Collectively they realize what they've already done in the timey wimey past/future. Gallifrey is frozen in time - disappeared in an instant so that all of the Daleks destroy eachother the moment the planet disappears.

The three doctors fly around Gallifrey as they call into Gallifrey high command. They lay out the plan - and all the previous Doctors appear all 12 of them... all 13 at Peter Capaldi appears only for a brief moment.

Cut back to the museum, the three doctors discussing the painting and the fact that they won't remember that they decided to save it, instead of burn it.

The Doctor (Hurt), back in the Tardis begins to regenerate as it leaves the museum.

Smith explains to Tenant that they'll be going to Trenzalore as he won't remember what happens anyway.

Smith talks to 'the curator' - he explains how he acquired the painting - "Gallifrey Falls, No More." The curator is of course Tom Baker and they joke about possibly being the same person - as he famously brushes his nose with his finger.

We end with a wide shot of all the Doctors standing looking up at Gallifrey.

Doctor Who 50th: 'The Day of the Doctor' Recap