, a four-part story arc written by Tony Lee, will be the final Doctor Who story from IDW Publishing (at least for now), and it seems as though Lee is determined to pull out all of the stops and capitalize on the furor around The Doctor's fiftieth anniversary in the tale.

Lee teased the development via Twitter this morning, linking to the image above (you can see a full version below), which bookends his first issue on the series, which featured an image of ten Doctors on one page.

This is one of those things that comics can definitively do better than TV.

Here's Lee's full statement, via Twitter, on the matter of the upcoming story: 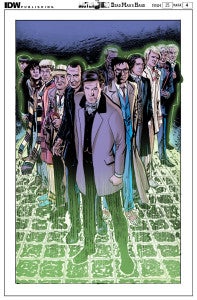 "My first story for @IDWPublishing was 'The Forgotten' - and the most iconic image of the whole story was the end scene with all 10 Doctors. So jump six years forward, and I'm at SDCC learning that my 4 parter is the last IDW Doctor who ongoing story. And, it's during the 50th. So @dentontipton and I got together and devised a plan to not only build up the story as a fitting end, not only make it an anniversary issue, but also to tie this story into the very first story I'd written. We were still early enough to go back and alter the script.

"And so 'Dead Man's Hand' is more than just a 4 parter. It's a direct sequel of sorts to 'The Forgotten' - and by the end you'll understand. But - we can't reference The Forgotten without returning to that iconic moment - so here is your sneak peek. Nobody has seen this...

"By @MIKECOLLINS99 - from DOCTOR WHO: DEAD MAN'S HAND #15, page 4. 'Hello, we're the Doctor. From Gallifrey.' When the comic is out you'll get the whole speech (removed for spoilers) and also more pages of each of these wonderful men. All of them."

That isn't Peter Capaldi representing the twelfth figure, no. We'd been previously told it was unlikely his Doctor would appear in an IDW book becuase of the timing of the publisher losing the American publication rights.

“IDW only has the Doctor Who license until December of this year, so its unlikely you’ll see the 12th Doctor featured in an IDW publication,” colorist Charlie Kirchoff said back in August.

“Sorry, I’ve got nothing,” came the publisher’s response when asked about the possibility.

John Hurt, though? That's a whole other kettle of time-traveling fish, apparently.