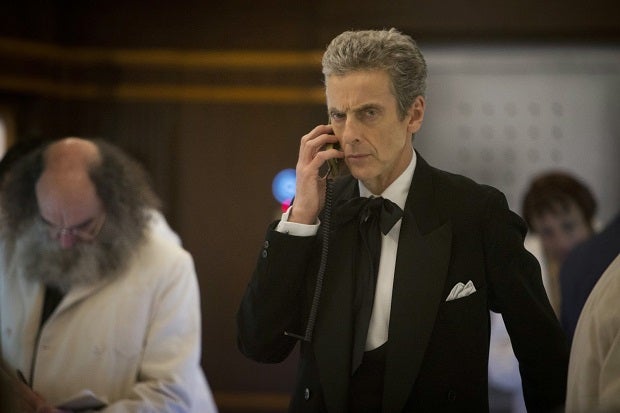 The episode begins on a train with a clock starting and counting down. An older woman on the train notices a man dressed like a mummy. Nobody else seems to be able to see the creature as it walks towards and eventually drains the life out of her.

The Doctor arrives in the TARDIS with Clara, dressed for the period. He tells her that this is the Orient Express recreated in space with incredibly accurate detail. The Doctor and Clara have a seat and talk. Eventually Clara ends up talking about how angry she was, that she felt like she hated the Doctor for weeks after “Kill the Moon,” but quotes someone saying hatred is too strong an emotion to waste on someone you don’t like. She says she can’t go on doing this the way he has, but then lets him go on describing the destruction of a planet that used to be nearby. A woman, Ms. Pitt who was sitting with the older woman in the opening overhears and says he must be lying, but a conductor shoes her off.

Clara urges the Doctor to investigate, but he’s reticent, saying that old women die all the time. They talk of finality, this being their last hurrah.

In his room, The Doctor is talking to himself about how sure he is that the elder Mrs. Pitt’s death is nothing. Clara, in her room, is on the phone with Danny, telling him about the train. The Doctor leaves his room just before Clara comes looking for him.

The Doctor finds a room with a medical machine. He meets Perkins, the chief engineer. They are mutually distrustful of each other.

Clara sees Ms. Pitt walking through the hall. Pitt says her name is Maisie. She tries to open a door to her mother’s body, but the door won’t open for her. She jabs the control with her shoe and goes inside.

The Doctor speaks to a Professor Moorhouse about the myth of the foretold, that involves being starred at by a mummy and then having exactly 66 seconds to live. This happens as a chef in the kitchen sees the Mummy, and the clock starts ticking again. The chef tries to hide in the freezer, but the mummy is somehow inside and kills him. The Doctor says the most interesting thing about the Foretold is that Moorhouse, who is specifically searching for monsters, is on board when it should happen to appear.

Maisie tells Clara that Mrs. Pitt was really her grandmother and not her mother, and that she feels guilty because she imagined her dying for years.

The Doctor finds the conductor and tells him he’s his worst night. He hands him psychic paper, and the man sees it as saying the Doctor is a secret shopper. In the conductor’s office, the Doctor accuse the conductor of not doing enough to stop the deaths. He leaves the office as Perkins shows up with documents for him. The Doctor feels like he got these for him almost too quickly.

Trapped in their train car, Clara and Maisie discuss the Doctor and how Clara won’t be travelling with him any longer.

The Doctor continues to investigate and finds the chef’s death delusions last 66 seconds, which matches the myth of the foretold.

Clara and Maisie continue to discuss teir trouble saying goodbye to people. The Doctor calls Clara and she tells him she’s trapped. He tries to open the door, but the computer, “Gus,” says it can only be opened by executive order. The spacey sarcophagus in the train car begins to opena dn the clock starts ticking again. It opens, but Clara says the sarcophagus is full of bubble wrap. The conduction shows up and takes the Doctor into custody, having called and found out he’s not a mystery shopper. They enter the main train car and one of the conductor’s men trying and failing to run from the mummy. With a third death, the conductor agrees to help. The Doctor explains the situation to the passengers on board. He says the strangest thing about the whole situation is that everyone on board is a doctor or professor, and that someone purposely chose these people to be on board with the foretold.

The train stops. Several of the passengers disappear, having been holograms, and the train transforms into a laboratory. Gus explains that they are to capture and study the Mummy. Gus reveals an ancient scroll and says the Foretold appears near it and kills in regular intervals. Moorhouse sees the mummy. The Doctor tries to get him to describe what he sees. He gives a few details then mentions the myth saying if you say the right word or make the right offer you can bargain out of death. He tries but fails. Gus records the death.

Clara discovers the sarcophagus is where they want them to place the mummy when they capture it. She also finds that they aren’t the first team gathered to study it. Several have come, failed, and were judged poorly prior to them. The ship jettisons the kitchen crew because the Doctor wouldn’t get off the phone. The Doctor wonder how the Foretold chooses its victims and asks for the victims’ histories.

They study the histories, but find nothing in common at first. Then the Doctor mentions how old Mrs. Pitt was. He realizes the Foretold is taking the sickest first. The Doctor says this also pertains to psychological issues. The conductor uses pills to sleep at night due to PTSD and so they believe he’s likely next. The lights flicker and Foretold appears before the conductor. He shoots but the mummy doesn’t flinch. The Foretold moves through the Doctor. It teleports into sight when the conductor turns around. He mentions the creature touches his head when it kills him. He wants to know what takes 66 seconds to recharge. He realizes the foretold is ancient tech using technology to keep itself alive. He drains energy from its victims. He’s a vampire that takes its victims out of phase, which is way only the victim can see it. They discover the next victim is Maisie.

The Doctor calls Clara and tells her to do whatever it takes to get Maisie to the lab. She lies and says the Doctor can save her. The door opens and the TARDIS is outside. They get to the lab. There’s a force field around the TARDIS, which means Gus know who the Doctor is, which means the Doctor lied about this being a relaxing trip. Clara is not amused. The Foretold appears and the Doctor uses a device to absorb Maisie’s trauma so the Foretold thinks it him and he can see it. He examines the Foretold, deduces that it’s a soldier and that the scroll is a flag. He says “we surrender” and the Foretold stops attacking, salutes, and falls apart. He discover malfunctioning device inside.

Gus begins killing those inside the train. The Doctor works on the mummy’s teleporter as the train explodes.

Clara awakes on the ground with the TARDIS and the Doctor. He says everyone escaped without a problem and he dropped them off here. He says he had to lie about his plan to not alert Gus.

Perkins is taking a look inside the TARDIS. He says it could use some work. The Doctor offers to let him stay onboard, but Perkins declines and leaves. Clara asks if the Doctor loves making the impossible choice. He says it’s just his life. She compares it to an addiction. Danny calls but Clara says she can’t talk. She does say she loves him. He returns it. She hangs up. She wants to keep going as long as she’s home safe and on time.

Doctor Who Series 8 Episode 8: Mummy On The Orient Express Recap With Spoilers