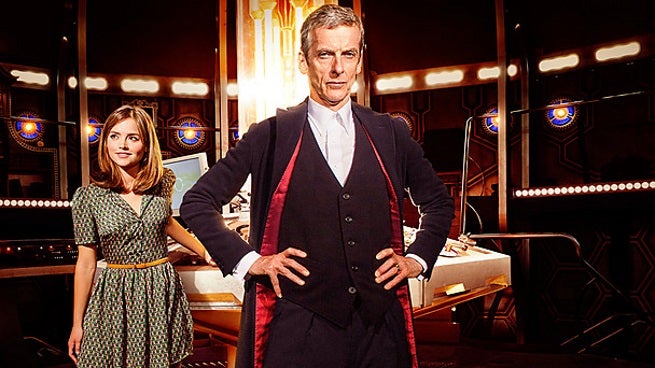 The BBC has revealed the episode titles, writers and directors for all 12 episodes of Doctor Who Series 8.

Showrunner Stephen Moffat will be sole writer on three episodes: the season premiere ("Deep Breath"), and both episodes of the two part season finale ("Dark Water/Death in Heaven").

Notably, the season finale is the only two-part story of this season, but it's the first two-part episode since the first half of Series 6. Moffat had previously decided to abandon the popular two-part stories that helped define the relaunched Doctor Who series under Russell T. Davies, largely because the second episodes of the stories usualy saw a significant dip in ratings, and  has instead stuck to single-episode, standalone stories since the show returned from the mid-series break during Series 6. Either this season's finale was simply too big of a story to fit in a single episode, or perhaps Moffat just wanted to give the format another try.

Other notable talents on the lists include Mark Gatiss, who co-created Sherlock alongside Moffat (and plays Mycroft Holmes in the series). His previous Doctor Who writing credits include "Victory of the Daleks," "Cold War," and "Night Terrors." Gatiss will write the third episode of Series 8, "Robot of Sherwood," which sounds like an adventure involving the heroic outlaw Robin Hood. Also, robots.

Phill Ford will co-write the series' second episode, "Into the Dalek," with Moffat. The episode sees the Dalek's surrounded a lone, helpless ship. Only the new Twelfth Doctor can save them, but in doing so he has to examine his conscience and ask himself the question -seen in the series trailers - "Am I a good man?" Ford previously co-wrote the Doctor Who episode "The Waters of Mars," and has also worked on The Sarah Jane Adventures, Torchwood, and the Doctor Who: The Adventure Games video game series.

Gareth Roberts, a veteran Doctor Who and The Sarah Jane Adventures writer,will co-write the series' sixth episode, "The Caretaker," with Moffat.

Another interesting title is "Mummy on the Orient Express." Likely involving the undead of ancient Egypt, the title is also a play on Murder on the Orient Express, a novel by Agatha Christie. We'll have to wait and see if this is a simple allusion, or if Christie herself will be making an appearance, as she did in the Series 4 episode "The Unicorn and the Wasp."

Check out the complete listing below. Doctor Who Series 8 premiers August 23 on BBC One and BBC America.

Episode 10: In The Forest Of The Night
Written by Frank Cottrell Boyce
Directed by Sheree Folkson