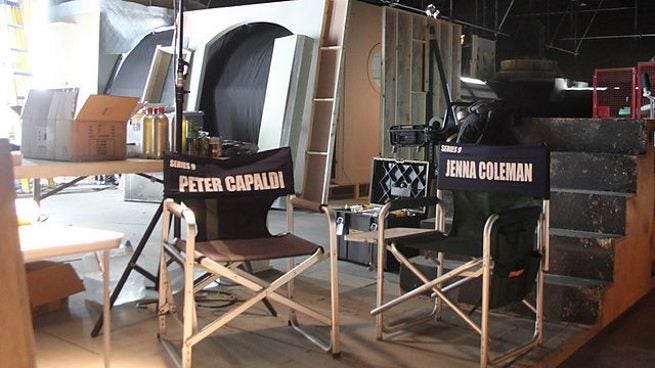 The BBC announced today that filming has begun in Cardiff for Doctor Who Series 9. The announcement included a set photo of chairs belonging to stars Peter Capaldi and Jenna Coleman.

They cast and crew are currently filming a two-part episode written by Toby Whitehouse and directed by Daniel O'Hara, both of whom worked on Being Human, andproduced by Derek Ritchie.

"An amazing guest cast for a brilliantly creepy two-parter by Toby Whithouse," said lead writer and Executive Producer Steven Moffat. "Peter Capaldi and Jenna Coleman are back in Cardiff, back in the box, and back in action - for one of our scariest adventures yet!"

"The adventures begin again for myself and Jenna and I'm delighted to be back filming my second series of Doctor Who," said Capaldi.

The two-parter will feature guest star Paul Kaye, who played Thoros of Myr in Game of Thrones.

"As a kid of the 1970s, the two shows you always watched were Top of the Pops and Doctor Who, they were unmissable," said Kaye. "I actually wrote a song called 'Looking for Davros' in my first punk band and I sang it like a demented Dalek. I got to present TOTP back in the mid '90's and landing this role in Doctor Who completes the dream double…Peter is a perfect Doctor and I'm loving every minute of the experience, even the five hours in make-up. What a treat, best 50th birthday present ever!"

Other guest stars include Morven Christie, Malik Suri, Sophie Stone, Zaqi Ismail, Steven Robertson and Neil Fingleton. Guest stars for other Series 9 episodes of Doctor Who will be revealed in the coming months.