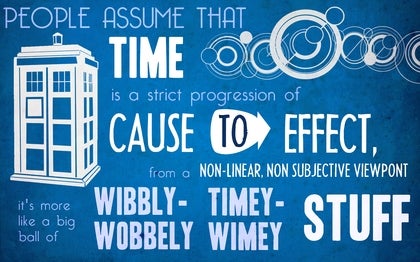 No more delays, no more staying off of twitter and facebook, living in fear that you'll spoil the next episode of Doctor Who... well at least for the 50th Anniversary episode anyway.

That's probably key, since most speculation has a new Doctor being introduced in the episode--something that the U.S. audience would hate to have spoiled for them!

BBC has announced that the 50th Anniversary show will start at the same time everywhere in the world. Radiotimes.com reports, "Global broadcasters have agreed to simulcast the 3D special to avoid plot leaks or spoilers, meaning that if, on the anniversary of Saturday 23 November, the episode was to be shown at 7pm on BBC1, fans in LA would see it at 11am while viewers in Sydney would be watching it at 6am on Sunday."

If you're lucky enough to be in the UK November 23rd - you can see it in theaters - as it will also be simulcast on the big screen.

As ComicBook.com reported earlier "the Doctor Who 50th Anniversary Special will star Matt Smith, Jenna Coleman, David Tennant, Billie Piper, John Hurt and Joanna Page. In a surprise twist in the recent series finale it was revealed John Hurt would be playing a Doctor, alongside Smith and Tennant."

If you haven't seen the trailers yet [spoliers] - get your 3d glasses on - as here's the trailer for the episode... in 3d, of course. If you don't have them laying around (what are you going to do if the Void returns?) below that is the one for unprepared people. Personally I'm not watching anything until it airs.

Doctor Who Special to be Simulcast to 200 Countries