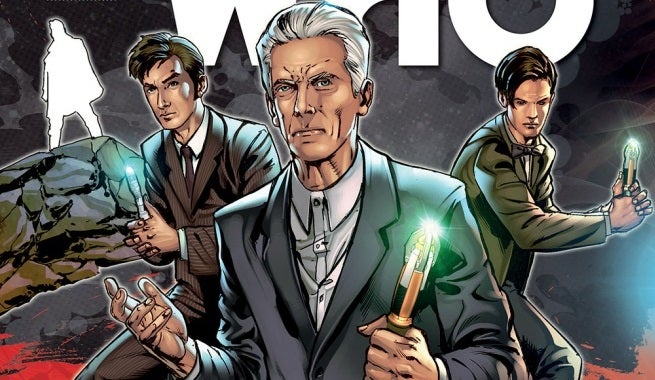 Titan Comics has official announced a 5-part weekly Doctor Who comics event that will together the Tenth, Eleventh, and Twelft Doctor, along with the comic book companions, for a crossover event.

The series will be written by Paul Cornell, the writer of Doctor Who episodes "Father's Day" and "Human Nature/Family of Blood," as well as several classic Doctor Who novels and runs on comics like Wolverine, Action Comics, Demon Knights, and Captain Britain and the MI:13. The event will be illustrated by Neil Edwards.

The weekly event caps off the first year of Titan's Doctor Who comics, following from the fifteeth issues of each of the ongoing Tenth, Eleventh, and Twelfth Doctor series. The event will run through August and September 2015, taking the place of the ongoing series.

While the announcement totes the series as a crossover between three Doctors, the cover to each issue – seen in the gallery below – prominently displays a banner promising four Doctors. Perhaps this has to do with the mysterious silhouette in the background of the first issue's cover. Could the Ninth Doctor be making a surprise appearance? Or perhaps the War Doctor?