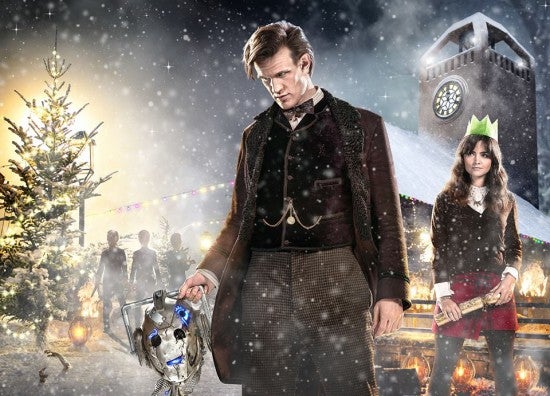 While it's movies that usually take center stage on Christmas Day, this Christmas brings a very special episode of Doctor Who. The Doctor Who 2013 Christmas Special is called "The Time of the Doctor," and it features the end of Matt Smith's time as the Doctor.

In "The Time of the Doctor" episode, the massed forces of the universe's deadliest species gather, drawn to a mysterious message that echoes out to the stars. And amongst them, the Doctor.

Rescuing Clara from a family Christmas dinner, the Time Lord and his best friend must learn what this enigmatic signal means for his own fate and that of the universe.

We've pulled together three official BBC preview clips of Doctor Who: Time of the Doctor below. In the first clip, Clara and the Doctor need a time machine. In the second clip, the Doctor and Clara are both in trouble. In the third clip, it's an awkward moment for the Doctor, Tasha and Clara.

"Doctor Who: The Time of the Doctor" is set to air on Christmas Day on BBC One at 7:30 PM and on the same day on BBC America at 9 PM ET.

Doctor Who: The Time Of The Doctor