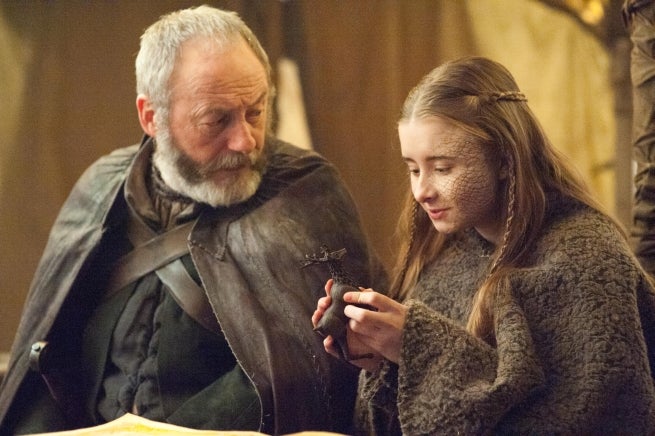 Stannis Baratheon is in a tough spot. He’s tasked with taking Winterfell from the Boltons in order to gain some momentum in his war against the Lannisters, but his mercenary forces have begun to abandon him, and the coming winter is putting him on a clock.

In a previous episode, Melisandre approached Stannis about using magic to gain a supernatural advantage against the Boltons. Her magic requires king’s blood, and the most readily available source is Stannis’ own daughter, Shireen. Stannis refused the idea outright.

But here’s an interesting line from the synopsis for “The Dance of Dragons.”

It seems that the decision is most likely related to his daughter and the potential power her death could unlock. But what decision does he make? He seemed pretty stern in his refusal before, and he’s not a man known for changing his mind easily. However, things are looking pretty desperate for his cause. On top of that, Ramsay is getting ready to mount an attack on Stannis’ encampment. Maybe that attack puts Stannis’s back hard enough against the wall that he decides to do the unthinkable.

There’s perhaps a way out, but it involves some potentially spoiler filled rumors:

Gemma Whelan, the actress who plays Yara Greyjoy, has been slated to appear in Season 5. And yet, with only two episodes left, we’ve seen no sign of Yara. In the books, she allies herself with Stannis against the Boltons. Perhaps she’ll give Stannis the last minute assist he needs…but will she arrive in time to save Shireen’s life?

Does Shireen Die In Game Of Thrones: The Dance Of Dragons?