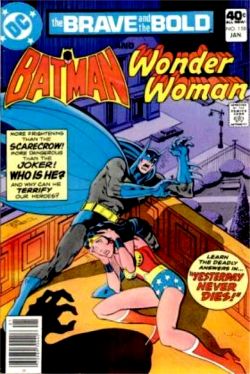 The Brave and the Bold had many similarities to Marvel’s Marvel Team-Up. Both series shared an anchor character, Batman and Spider-Man respectively, usually teaming those anchors with another hero. The most appealing aspect of the series, for many, was the self-contained stories, a nice way to see your favorite heroes battling a usually unknown villain for not much money.

That leads us to this installment of Dollar Bin Discoveries, a tale from The Brave and the Bold that pairs Batman up with Wonder Woman. While the dialogue was sometimes a bit stilted, the plots not always tight and the villains ham-handed, the series did have some highlights now and then. Would this issue be one of those examples?

Summary: The wealthy always seem to be under attack because, well, they’re wealthy! In Manhattan, where both Bruce Wayne and Diana Prince are in attendance, of course, a gang of armed robbers crashes. Batman swiftly handles them, and Bruce is able to attend his meeting with the French ambassador, here for the closing of a deal to put an American automobile factory in France that will lead to jobs for both countries. During that meeting, another intruder crashes the party, this time wearing a costume but finding Wonder Woman in his path. After throwing some odd pellets at her, Wonder Woman is enveloped in a fog that makes her relive the death of Steve Trevor, her long-time love.

Her wail of grief echoes across the mansion, and Bruce excuses himself from the ambassador to “go find help”. Of course, Bruce finds a terrified Wonder Woman, while the costumed terrorizer, not the Scarecrow as you might have imagined, but D j Vu, has given the French ambassador the fear treatment. He leaves a note, warning future action if the economic deal goes forward. With that, Bruce and Diana make a commitment to go to Paris to track this villain down.

Wonder Woman, following Batman’s work on the chemical trail from those pellets, finds D j Vu, oddly enough now called Flashback (?), hard at work in a chemical factory on a new batch of fear juice. He quickly escapes their encounter, threatening certain death in revenge for “the one who died before” at that evening’s gala event finalizing the deal. Bruce and Diana must skip the party, they get invited to the best ones, don’t they, in order to watch over the evening. They’re surprisingly ambushed by Flashback, who manages to trigger Batman’s memory of his parents’ death. It’s odd that Wonder Woman is not affected this time, but no time to worry about that, as Batman quickly lashes out at her as his parents’ murderer.

Diana takes a gamble in throwing them off a building, hoping Batman’s reflexes will kick in and work through the fear. It works, of course, and the duo is able to stop Flashback in the middle of his plan at the party. It’s learned that Flashback’s father died in an American factory in France as a worker, a rather odd origin for this one-trick villain. With that, Bruce and Diana part ways once again.

Issue Worth?: Considering the nature and purpose of The Brave and the Bold, this book more or less fits the bill. Flashback makes an odd villain, and he is only seen in a handful of panels overall, which makes him quickly forgettable. There are a couple of distracting inconsistencies here, notably the lack of effect of Flashback’s pellets on Wonder Woman the second time around. All things considered though, this is a “ you almost get what you pay for issue.” Total Value: .75