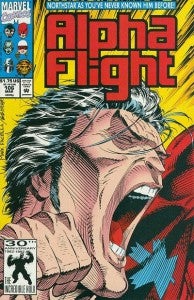 It seems like just yesterday when I gave you intelligent readers a rundown of some of the more memorable "special issues" in comic book history, and here we are again with another special issue, this time courtesy of Dollar Bin Discoveries, a semi-regular feature where I mine the local comic book shop's dollar bin in search of something eye-catching for a bargain.  I'll read the issue I buy, then rate it here based on its dollar worthiness, on a scale of .25 to $1.00.  This previously mentioned special issue has particular relevance once again, as it marks the official coming out from the closet of Alpha Flight member Northstar.  It's interesting when comic books intersect with topical issues, and this particular issue comes at a very key time in history.  1992 takes us back to the days pre-Ellen Degeneres and post-1980's AIDS mystique /hysteria/misunderstanding.  Taking a look back at issues such as these can be interesting time capsules into eras in our past when cultural landmarks can vary depending on social norms.  Let's take a look back and see just how this issue stacks up today. Book: Alpha Flight #106 Date: March 1992 Summary:  At the start of the issue, we're given a quick rundown on perhaps the earliest Canadian super-hero, Major Mapleleaf, who now, retired from the public eye, sits alone and aged in his home.  Meanwhile, Alpha Flight battles with Mr. Hyde, over from terrorizing Daredevil no doubt, just as Northstar discovers an infant girl in the alley near the fight.  The team convenes at the local hospital to find out about the condition of the child.  In another early 90's convention, I was amused to see Puck smoking a cigar in the waiting area.  Anyway, Northstar is told that the child contracted HIV from its mother and is infected with AIDS.  Even for all the pompous posturing that Northstar does in this issue, artist Mark Pacella does an excellent job of humanizing Northstar with splash pages and panels that show his grief and pain over the child's diagnosis. Weeks go by, and all of Canada is invested in the plight of this young girl, now dubbed "the youngest member of Alpha Flight." Everyone is taken with her case, all but Major Mapleleaf, who storms the hospital, incensed. The exchange/fight between Mapleleaf and Northstar is equal parts heartbreaking and awkward to watch.  Over the course of the fight, it's revealed that Mapleleaf's son died of AIDS just last year and the attention focused on this one infant has him in outrage.  Because his son was gay, Mapleleaf tells Northstar, his death became "a statistic".  Northstar, in a confession not addressed before, tells the major that he understands the plight of homosexuals in the modern day because he himself is gay.  The conversation and fist exchanging that follows is straight political commentary on who is responsible for the lack of attention the AIDS crisis receives.  Politicians, closeted celebrities and other figures are indicted, all leading up to peace between the two combatants in a matter of shared pity and solace. Later on the young girl is dying, and Northstar tenderly says goodbye.  In the end Major Mapleleaf and Northstar come to sympathize with one another and their respective losses, Mapleleaf for his son and Northstar for the "daughter" he so briefly had.  The final splash page shows the true nature of one of the few things that can equalize us as humans, shared grief. Issue Worth: It's interesting to note that this issue is in the dollar bin when so many other "issues" issues go on to become valuable comics.  The "alcoholism cover" of Iron Man, Speedy's drug addiction decades before in the pages of Green Arrow/Green Lantern, and yet Northstar's coming out sits in the dollar bin.  No judgement here, and I chalk a lot of that up to the glut of books on the market in the early to mid 90s, however it is interesting to note.  So many accuse the upcoming Astonishing X-Men #51 , where Northstar marries his boyfriend, to be little more than a stunt.  It should be noted that it's important though, just as this issue was back then.  While the book as a whole may seem a bit heavy-handed in its treatment of the AIDS crisis and the major and minor players involved, it's always a brave step when art decides to so unflinchingly depict life.  Final Value $1.00.