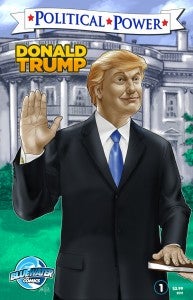 With a possible Presidential run in his future, Donald Trump is more in the news than ever. Now, The Donald is joining many other celebrities and politicians in getting the comic book treatment. Bluewater Productions, which has previously done biographies on everyone from Facebook founder Mark Zuckerberg to President Barack Obama’s dog (no we’re not kidding), has announced that they will be printing a Donald Trump biography comic book.

“Political Power: Donald Trump” is scheduled to be released in October 2011. The comic book will tell the story of the life and career of the “high-profile tycoon, presidential aspirant and media bon vivant.”

In explaining why Donald Trump’s biography is being published as part of the Political Power line rather than as a celebrity bio, Bluewater president Darren Davis said, “We’re trying to portray him less as a caricature and more as potential leader of the free world.” Davis added, “Whether you agree with his political posturing or find him completely self-interested and insincere, he’s pulling up a chair at 2012 Republican presidential nomination table.”

The Donald Trump comic book is being written by freelance journalist Jerome Maida. The comic is thirty-two pages long and will cover Trump’s transition from a real-estate magnate into a television star, who is frequently in the spotlight and the tabloids.

"Trump may be egocentric, he may be a grandstander and a loudmouth, but there’s no denying he has the attention of America,” said Maida.

The cover for “Political Power: Donald Trump” will be drawn by artist Joe Phillips. The comic will retail for $3.99. In addition to being sold in comic book shops, the Donald Trump comic book will be available via several online venues such as Amazon.com and the Barnes and Noble and Borders.