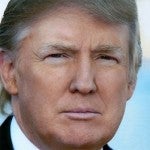 Do you know who else is acting like a promotional partner for The Dark Knight Rises? The answer is none other than Donald Trump. Earlier today, Donald Trump tweeted, “The new @DarKnightRises trailer is fantastic https://lat.ms/MraU9L Trump Tower stood in for Wayne Enterprises during filming.”

Yes, so The Donald and Bruce Wayne both share a building. Since The Dark Knight Rises world premiere takes place in New York City on July 16, we wouldn’t be surprised if Donald Trump was among those walking the red carpet. For the rest of us, look for Wayne Enterprises a.k.a. Trump Tower when The Dark Knight Rises is released in theaters across the United States on Friday, July 20,  2012.