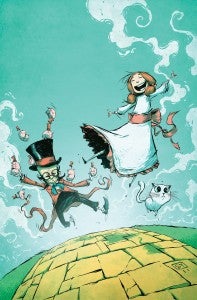 Marvel has announced the next chapter in their land of Oz series of comic books. Dorothy & The Wizard In Oz will be an eight issue mini-series by Eric Shanower and Skottie Young. Dorothy & The Wizard in Oz tells the story of Dorothy and her cat Eureka, who are transported back to world of Oz by the great 1906 San Francisco earthquake. In the series, Dorothy and her friends find themselves trapped in a realm made of glass, and The Wizard of Oz must come to their rescue. "I really look forward to following Dorothy, the Wizard, and their newest friends on their underground adventures in Dorothy and the Wizard in Oz," said Shanower. "I can't wait to see what Skottie comes up with when he shows us the bizarre vegetable people, the soundless wooden gargoyles, and how he'll deal with the valley of invisibility." "I'm excited to jump right into the 4th OZ novel. This one has a wide range of crazy characters that I'm dying to get my brush on," added Young. "I don't think I'll ever get used to the amazing response the OZ graphic novels have received from fans and our peers. It's so flattering and just gives me that much more motivation to try and push even further with each adaptation." Dorothy & The Wizard in Oz #1 is set to arrive in comic book stores in September of 2011.

Dorothy & The Wizard In Oz Announced By Marvel Comics

Every Movie and TV Show Leaving Netflix in June 2022

The Flash: Caity Lotz Directs in "The Curious Case of Bartholomew Allen" Photos