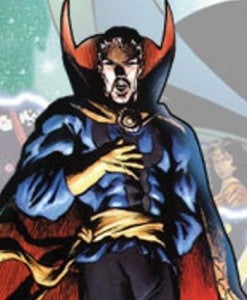 With both Thor and Captain America becoming box office successes, it looks like Marvel isn’t slowing down on bringing their characters to film. It appears that Marvel is moving ahead with a Dr. Strange movie.

Dr. Strange has long been a fan favorite to get the big screen treatment, and Marvel executives are evidently paying attention. Way back in June of last year, Deadline reported that Thomas Donnelly and Joshua Oppenheimer had been hired to write a Dr. Strange script.

According to Twitch Film, Donnelly and Oppenheimer have now completed their script, and the Marvel execs are now shopping for a director. Dr. Strange is reportedly being eyed for a 2013 release date.

No word yet on who will wear Dr. Strange’s cape, but if things are moving as fast as reported, expect those rumors to start flying soon. Given past history at Marvel Studios, there is no telling if they will go with an established actor (like they did with Robert Downey, Jr. in Iron Man) or a young up-and-comer (like they did with Chris Hemsworth in Thor).

Of course, a name that has been tossed around for quite some time among fans is Johnny Depp. Would you like to see Johnny Depp play Dr. Strange? Or who else would be your choice for the role?

Dr. Strange Movie In The Works