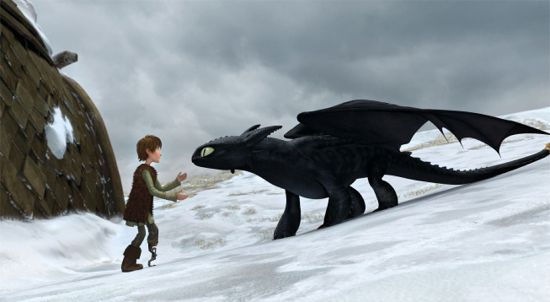 With most of the regular network shows on hiatus for the holidays, there are quite a few animated specials airing. An animated special called Dreamworks Dragons: Gift of the Night Fury is airing tonight on FOX. The special is based on the DreamWorks Animation film franchise “How To Train Your Dragon.”

According to the FOX description, Dreamworks Dragons: Gift of the Night Fury “is a story of faith, love and friendship that takes viewers on an adventure of dragon-sized proportions as the villagers of Berk prepare for the winter holidays. As the festivities approach, the dragons make a sudden mass exodus, leaving Hiccup (Jay Baruchel), Astrid (America Ferrera), Stoick (Gerard Butler) and the rest of the gang saddened by the loss of their winged friends. A wild turn of events leads Hiccup to discover a mysterious, never-before-seen island and learn the true reason why the dragons left the village. Friendship and loyalty abound in this touching holiday tale of spreading one’s wings, but always staying close to home. As Hiccup says, ‘The only real comfort against the cold are those you keep close to your heart.’”

Dreamworks Dragons: Gift of the Night Fury premieres on Monday, December 17 at 8 PM ET on FOX. The second and third feature film installments of the “How to Train Your Dragon” film franchise are due in theaters on June 20, 2014, and June 18, 2016, respectively.